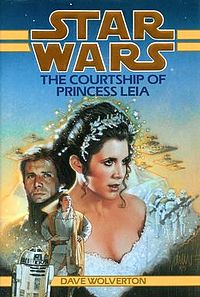 I have read almost every book in the Star Wars Expanded Universe that takes place post-movies. With the sun setting on the EU and rising on a new series of “canon” novels, I’ve had a hankering to go back to the beginning (Princess Bride reference, anyone?) and re-read a number of the books in the series. So I’m going to. I think I’ll actually start with Darth Pelagius because it’s been recommended by a large number of people, and then dive in at the place I started so long ago: The Courtship of Princess Leia.

Yes, I will be writing reviews of each book along the way, so if you want to follow/read along, you’ll be able to. These posts won’t be going up at any specific or regular times so just be aware of that. I may or may not skip the X-Wing series because I don’t own them all.

Let me know what you think of this as a possibility and if there are any specific things you’d like to have me mention in a review. I want these to be fun and not just reviews, so categories like ‘Best Droid Moment’ might become a reality.

I’ve also recently edited this post to include official canon novels from the Disney launch of their own fictional Star Wars universe.

Darth Plagueis by James Luceno– Recommended by numerous friends, I finally got around to reading this book on Palpatine’s past. Is it worth recommending?

The Courtship of Princess Leia by Dave Wolverton– The first Star Wars book I ever read. Does it hold up, or was nostalgia the only reason I enjoyed it?

Tales of the Bounty Hunters edited by Kevin J. Anderson– A collection of short stories about those bounty hunters encountered in The Empire Strikes Back.

Star Wars: Labyrinth of Evil by James Luceno– A prequel book to Episode III purports to fill in some blanks in how Anakin became Vader.

Star Wars: Revenge of the Sith by Matthew Stover– the novelization of the film does some work in making the movie seem not so disappointing.

Heir to the Empire by Timothy Zahn– The Thrawn Trilogy gets underway. Is it deserving of its fame?

Dark Force Rising by Timothy Zahn– Book 2 of the Thrawn Trilogy. Does it continue to succeed?

The Last Command by Timothy Zahn– The conclusion of the Thrawn Trilogy. Will my fond childhood memories be shattered, or will the book hold up after 20 years?

The Hutt Gambit by A.C. Crispin– The second book of the Han Solo Trilogy. How does the famous scoundrel hold up in this prequel book?

Rebel Dawn by A.C. Crispin– The Han Solo Trilogy concludes with a book that brings Han and Chewbacca all the way up to the events of “A New Hope.” Can it stand up to the rest of the trilogy?

Darth Bane: Path of Destruction by Drew Karpyshyn- The Darth Bane trilogy came to me highly recommended. It deserves accolades.

Darth Bane: Rule of Two by Drew Karpyshyn– More exploration of the background of the Sith long before the Star Wars movies, and it’s well worth your time.

Darth Bane: Dynasty of Evil by Drew Karpyshyn– The conclusion of the fantastic Darth Bane trilogy proves the whole series can stand on its own.

Jedi Search by Kevin J. Anderson– The first book in the Jedi Academy series seeks to establish some new enemies and main characters.

Dark Apprentice by Kevin J. Anderson– The second book in the Jedi Academy series–does it manage to cash in on the previous book’s promise?

Champions of the Force by Kevin J. Anderson– The conclusion of the Jedi Academy Trilogy seeks to wrap up a number of loose ends, but can it deliver a compelling finale?

The Mandalorian Armor by K.W. Jeter- A great first entry in a trilogy about one of the most enigmatic  and interesting side characters from the films.

Slave Ship by K.W. Jeter- Does middle book syndrome strike again? (It does.)

Hard Merchandise by K.W. Jeter- What will Fett do next? Can the strong start of the series be reflected in the concluding work?

Star Wars: A New Dawn by John Jackson Miller- this book kicks off the canon novels with a bang, introducing some fascinating characters and great plot to start the TV series.

Other Links Sci-Fi Hub– Check out this page for links to all my science fiction related posts, along with hubs for other things like Star Trek and Warhammer.