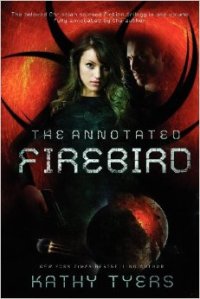 Permit me a brief autobiographical introduction to this microview:

I remember when I was younger–probably about 12 years old–shopping a table at a book sale that was going on in the parish hall at my church. I saw the cover of this book that looked like science fiction and reminded me of Star Wars. I had to have it! There were three of them, a trilogy! I begged my parents and with some extra chores loaded on I received the books.

I devoured them almost instantly, used Legos to try to build spaceships from them. I went to a Christian bookstore and demanded more science fiction from the author. The bewildered staff searched in vain to find anything else from Kathy Tyers. Without any more to read, I forgot the author but the trilogy entered that hallowed place of unassailable nostalgic bliss that we create in our childhood.

Then, when I saw a newly released edition with notes from the author pop up in my recommendations on Amazon, I was instantly intrigued. Lo and behold, sequels were on the way! I purchased the trilogy again, but didn’t read it, fearful I would penetrate that nostalgic bubble and perhaps discover the series wasn’t as amazing as I’d hoped. Finally, after over a year of owning the book, I opened it up, read it, and will now offer my brief thoughts in the following microview with you, dear readers. I have written more on the themes found in the book on my philosophy and theology site.

There are SPOILERS in this microview.

trilogy is undoubtedly a space opera. It spans several planets, three cultures, and the conflict in which they become embroiled. Firebird, the female protagonist, hails from a society with a monarchy that has developed a strong aristocratic power base while those in the lower classes are essentially serfs. She herself is a noble, but is far enough back in succession that she is considered a “Wastling” and is to dedicate her life to the eventual death in conflict or an honorable suicide. She is captured and falls in love with Brennan, a man with psychic abilities from a culture of people who have lost their home and believe in a coming Messiah.

The series traces the path of these two–primarily through the viewpoint of Firebird–as their societies are enmeshed in a conflict which also involves the Federacy, a government of loosely joined planets in alliance. Political intrigue, themes of faith, prayer, and prophecy, and action abounds throughout the series.

There is so much to love about this trilogy that I’ll name only a few major points. First, although Tyers uses the series to explore questions of faith, it is never preachy and the different belief systems presented in the book never feel as though they are a mere veneer for evangelism. Second, the story is extremely interesting as covers a wide range of locales which each are developed well. Third, the characters are entirely believable and experience genuine change and growth throughout the series that never feels forced.

I have to commend this trilogy highly to you, dear readers. It was a real treat to re-read the series and realize that my younger self’s joy in it was well-placed. It is the kind of story that sticks with you long afterwards and the characters are both interesting and endearing.

+ Epic space opera that spans across several planets
+ Fascinating account of faith in a science fiction universe
+ Interesting annotations from author (this edition only)
+ Never gets preachy, even while sharing genuine insights into faith and inter-religious dialogue
+ Spaceships blow up, assassins run free, and political intrigue abounds
+ Great world building with many interesting locations
+ Diverse set of characters who experience genuine character growth throughout the series

Kathy Tyers’ The Annotated Firebird is a stirring science fiction epic of faith and conflict in the far future.

Kathy Tyers’ “Firebird Trilogy”- Faith, Humanity, and Conflict in the Far Future– I look at a number of worldview issues in the Trilogy in this post.

7 thoughts on “Microview: “The Annotated Firebird Trilogy” by Kathy Tyers”