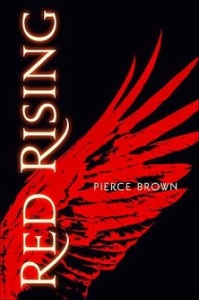 Anytime I read the phrase “it’s the next Hunger Games” I get excited. When that is combined with comparisons to Orson Scott Card’s phenomenal Ender’s Game (my look at the book here), it’s time to read that baby! Pierce Brown’s Red Rising fulfilled both of these criteria, so I rushed to get it from the library (well, I had to wait about two weeks, but you get the idea). What did I think? Read on! There are minor SPOILERS below.

Brown has done an excellent job world-building. The Society dominates the known universe and different castes are maintained through a Color system. The eponymous Reds–of which Darrow, the main character, is one–live on Mars and terraform the planet in brutal conditions. They don’t even know the extent of their plight, as the book later reveals whole layers of reality beyond the narrow confines of the beginning.

Violence often seems offhand, but Brown writes it in such a way as to speak to the beauty of human activity and love even in times of great sorrow and stress. He has a way of capturing emotions in just a few sentences that is fantastic. The book packs a heavy punch in the emotional category.

The story also feels like the start of something epic. The injustice in the system must be taken down! The way Red Rising sets the table for later books is great, and the story is extremely compelling. The book is definitely a page-turner.

All of this is not to say there aren’t any negatives. First, the fact that this book does draw so many comparisons to the aforementioned Hunger Games and Ender’s Game means that readers will compare themselves, and Red Rising doesn’t quite reach the heights of these other books. That’s not an awful thing–Ender’s Game did win the Hugo and Nebula awards after all!–but it does set up a bit higher expectations than the book reaches.

In particular, the book flows quite a bit like Hunger Games. Darrow exists in a world dominated by a hierarchy and he is on one of the lowest rungs. Whenever resistance raises up, it is violently suppressed. He ends up inside a created world for a game that determines peoples’ places in society. There are many comparisons to be made, and this makes the book feel derivative at times. The “game” portion of the book also seems at least 50 pages too long, as we read about raids, violence, and more in a seemingly endless cycle.

The world which is so promising never quite gives readers the access to it they desire, but this is the first in a trilogy so hopefully we get to explore more later. Also, the crude language and violence seems a bit over-the-top for something deemed “Young Adult” and although the latter is often integral to the plot, they both seem unnecessarily ubiquitous at points.

This book is really a good read. It could have been shorter, and it has a few other pitfalls, but it is quite compelling. I look forward to reading the next one.

Pierce Brown’s Red Rising has much potential and several unique aspects, but doesn’t quite rise to the same level as its inspirations.

Red Rising: You Must Live for More– A look at the worldview issues behind the book from Anthony Weber. I highly recommend you follow his fantastic blog!

One thought on “Microview: “Red Rising” by Pierce Brown”