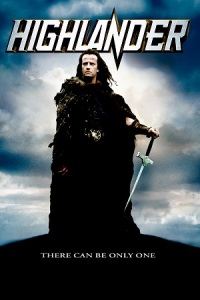 The whole movie should have been in this setting.

I have embarked on a quest to watch a number of 80s Fantasy flicks and share my findings with you, dear readers. Here, we look at “Highlander.” I have not seen this movie before, but like just about everyone, I know THE quote: “There can only be one…” so it’s kind of like I’ve seen it. Okay, not really. Onto the review!

Highlander giveth, and Highlander taketh away. The film has some scenes that are fantastic, but other scenes are just disastrous. The depiction of MacCleod’s wife growing old and dying was really touching, for example. But other scenes are drivel, such as the scene with the Kurgan driving like a maniac. It just makes me wonder what the heck the point of it is. The background story is intriguing and built up well, but then largely abandoned (what happened in the intervening years?).

Frankly, if the film had only been about the discovery of immortality, it would have been better. Perhaps it just bites off more than it can chew as far as the time it is supposed to cover is concerned. The concept of these immortals having to go around killing each other is a bit underdeveloped as well. Why? Other than the “Prize,” what have they to gain from it? Why must there only be one? Why can’t we all just get along? Alas, we are never treated with further explanation because we have to get dragged back into the 80s to fight Kurgan. On paper, it’s a good concept, but in practice I was left just wishing for more plot and less absurdity.

We just never get a chance to see whether the film is Braveheart or the Matrix, and I wish that the two points had melded together better. It really does have the feel of an awesome, epic movie at several points–during the training montage, for example–but then it is just dragged down by silliness. The world has a true feel of lore to it and behind the scenes, but I was left feeling like the curtain was never fully pulled away to see that lore. The hints we get in the flashback scenes are awesome, and the way the movie very slowly gives hints of what’s happening is actually really well done, but all the potential never fully comes to fruition.

Indeed, it seems to me that most of the “modern” scenes in the 80s are unnecessary and frankly kind of silly. We never get a sense of why the gathering of the Immortals needs to happen at that point in history or why there are so few remaining.

I really wanted to love this movie, and it fed me plenty of potential for me to love it, but it just didn’t cash in.

My Score: C “An uneven film that is at times awesome, but at other times terrible.”

One of the most inconsistent and frustrating movies I’ve seen. Lots of potential and some cool scenes make me not sad I watched it, but I could stand to skip about 1/2 the movie and then have that 1/2 filled in with more cashing in on the premise.