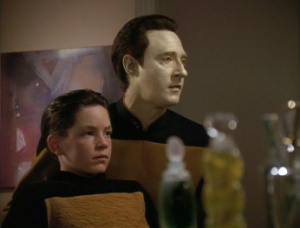 I shall call him “Mini-Me.”

The Enterprise investigates a distress signal, and it turns out the Starship Vico has multiple hull breaches. All on board have been killed, except for one boy whom Data rescues through a feat of strength. On board the Enterprise, Timoty, the boy, tries to suppress his feelings of anguish over the loss of the ship and his parents. He does so by deciding he is an Android and imitating Data more and more. It turns out he thinks that he destroyed the Vico when the ship shook and his arm touched a control panel right before the ship was largely destroyed. As the Enterprise suffers its own similar difficulties, he relates to Data what happened to the Vico and Data discerns the ships shields are causing resonance that destroyed the Vico. They save the ship by lowering shields and Timothy realizes he’d rather have emotions. He and Data agree to be friends.

Here’s another episode I think I really didn’t like as a child, but came to enjoy a lot as an adult now. When I was younger, I pretty much just thought that everyone would want to be like Data, so it didn’t make a lot of sense to me as to why this was an issue (who wouldn’t want super strength and the ability to read books in seconds?). Now that I’m older, though, I get the interest of the psychology behind the events. The big reveal of the fact that Timothy thought he had destroyed the ship was a great twist.

I appreciated the episode dealing with the difficult psychological problems behind loss and coping. It was pretty charming seeing how Data dealt with Timothy, despite his own lack of emotional depth (AKA no emotional depth). The resolution of the threat to the Enterprise was believable, even though it was fairly instantaneous. Tying it together with how the Vico was destroyed was a smart move. Great episode overall!

Grade: A “A charming look into humanity with Data as a foil.”

Wife’s Grade and Comment: A “Lots of emotional impact!”

Three Ullians–people with powerful psychic abilities–are traveling on the Enterprise in between destinations. The Ullians–Jev, Tarmin (Jev’s father), and Inad–interact with the crew and help recover memories. However, Troi is attacked sexually through the psychic powers of Jev and is thrown into a coma. As other crew members investigate, they are also put into comas. The Ullians are suspected, and crew members try to pinpoint whodunnit. When Troi recovers, Jev helps her recover the memory of the event but distorts the memory to implicate Tarmin. However, La Forge and Data manage to track down that it was, in fact, Jev alone who can account for all the data they collected from previous places the Ullians visited. As Jev tries once more to attack Troi, he is stopped and arrested.

It’s hard to score this one. It was tough to watch, but not bad. It’s surprising to see TNG deal with such a difficult issue in a way that is both moving and disturbing. This is, at its core, an episode about the trauma of rape–even if that is put throw mediation of being “only” mental rather than physical. The fact the episode never tries to downplay this as “only” mental helps sell it as genuinely dealing with the issue. It was really well done.

Plot-wise, it was a good idea to have Jev try to throw off suspicion in more than one way. It would have been too simplistic to have him simply put everyone into comas. His redirection that almost works both helped heighten the drama and add layers of complexity that were necessary to keep me engaged in the investigation.

One issue I had with the episode was Picard saying he wasn’t sure there was any way to bring charges for the crime because there was no such crime in human experience. I think the later discussion that used the word “rape” is appropriate–this was rape and should be punished as such. It seems the Ullians had such a system in place, which alleviates some of this, but I would think Picard would be capable of making this connection himself and pointing it out.

There were some lighthearted moments thrown in, like Riker’s offhanded remark that he’d rather not share any of the memories he’d like to dig up (shades of Kirk?). These moments were needed to break up what is otherwise a truly foreboding and serious episode. Well done, but a tough episode to watch.

Grade: B+ “An extremely difficult episode.”

Wife’s Grade and Comment: B “A good premise was ruined by being just a little bit weird.”