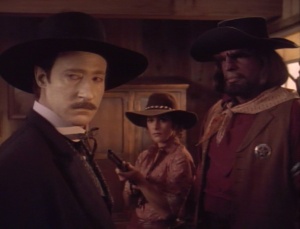 A strange transporter incident leads to Ensign Ro, Captain Picard, Guinan, and Keiko O’Brien to have their bodies turned into those of children. As the crew tries to adjust, a treacherous Ferengi trap leads to the Enterprise being taken over. The bite-sized crew members have to work with children to take the ship back over, and succeed in the nick of time.

I found this an absolutely charming and delightful episode. Seeing how each individual struggled with their new body was hilarious, but also at times endearing or even sad (as in Keiko’s case). Picard, of course, had a lot of trouble simply because he doesn’t like children. My favorite part was watching young Picard throw a fit and hug Riker, his “dad.” It was hilarious and advanced the plot.

The Ferengi are always a bit hard to take seriously as a major threat, but they did a good job here of making them more threatening by taking over others’ ships and being craftier than usual. Too often, they’re portrayed as just being stupid or greedy (or both), but “Rascals” cashed in on them being more nefarious and cunning.

I remember hating this episode when I was a kid. After all, why would I want to watch what kids were doing when I could see the cool adults solving all the problems? But now, adult perspective has made me think this episode is just quite a bit of fun to watch.

Grade: A “Surprisingly fun, ‘Rascals’ was a treat to watch.”

Wife’s Grade and Comment: A “It was delightful. Also, ‘A+’ to whoever got the same actor to play little Whoopi that played her in Sister Act.”

“A Fistful of Datas”

The Enterprise has a few days to wait for a rendezvous and as they do so, Geordi and Data attempt to make Data into a backup of the computer system. Meanwhile, Worf and Alexander are joined by Troi as they go to the holodeck to enjoy a Wild West (as they call it, “ancient West”) adventure. Data’s interfacing with the computer, however, leads to his neural network weirdly integrating with parts of the recreational systems on the ship, including the holodeck. As systems on the ship go haywire, Worf, Alexander, and Troi are put in terrible danger as Datas begin to take over the holodeck simulation. Ultimately, they manage to play out the story of the ancient West and Geordi/Data get Data’s brain out of the computer.

Genre-blending can sometimes go terribly… TERRIBLY! Other times, it is awesome. Here, we have a mash-up of science fiction and wild west and it goes quite well indeed (of course, I would be remiss to mention Firefly around as another example done right).

First, the opening was hilarious. Picard just trying to relax while the whole crew comes to him with various requests… then Worf trying to get out of the time in the West with Alexander.

It was funny to see Data taking over various personages in the holodeck simulation–the amount of outfit changes he must have had to do for this episode! I laughed out loud a couple times as the transition continued. It feels like a generic shootout set-up (though with strong tones of the movie Tombstone, which is fantastic), but you don’t mind because having it mixed in with the science fiction elements just makes it all work together smoothly–or at least more smoothly than one might expect.

The episode comes full circle at the end when Worf tells Alexander the Ancient West needs its sheriff and deputy. It’s just so fun.

Grade: A “Who wouldn’t want to mix Wild West adventure with Star Trek?”

Wife’s Grade and Comment: A “It also was delightful!”