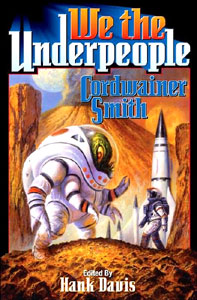 “Don’t judge a book by it’s cover.” It’s a maxim that I hammered into my own head for quite a while. Yet, as an author (Eric Flint) said at a convention I was at some time ago, “People don’t buy books based on the covers, but they do look at them based on the cover.” I bought We the Underpeople because the cover of the next collection of Cordwainer Smith’s writings looked so interesting to me I figured I had to have them both. (The cover has a dragon eating a space ship! What could go wrong!?)

I finally got around to reading the first collection, which has a bunch of Smith’s short stories as well as the novel Norstrilia in it. I gotta say it blew me away. The introduction certainly set me up with high expectations–this unknown author with a pseudonym that made it even harder to determine blew up the science fiction scene when one of his stories was published in a sci-fi magazine some time ago.

Well, the stories blew me away too. Here is a collection of stories unified around a central timeline that has breadth and scope that is sometimes hard to comprehend. As a reader, you’re thrown into a world with a huge amount of terminology, names, and histories that are unknown and mostly used unapologetically until you figure out what they mean. It’s a bit like reading Dune the first time (how’s that for a recommendation?). The world Smith created spans thousands and thousands of years, and the stories take you across a portion of that time.

Humanity has sought to eliminate sorrow and hardship, but in doing so have created the “Underpeople”–human-like creations made from synthesis with animals. These underpeople basically serve as slaves for the “real people.” Thus, there are some elements of social justice found throughout the stories. There is also a strong sense of dystopia as the way hardship is eliminated is through brainwashing, reconditioning, and the radical loss of human freedom. There are also elements of religion found scattered throughout, with subtle references to Christianity melded into a kind of retelling of Joan of Arc, among other stories. One central theme in the novel that is included in this collection, Norstrilia, is the theme of forgiveness and the power that it can bring in one’s life.

All of these elements are set to an amazing lyrical style of writing which weaves poems and songs and even descriptions of artwork into the stories in meaningful ways. Smith’s writing style makes the words seem to flow from the page in a rhythm, even when it is written into paragraph form. Smith’s background in psychological warfare (I’m not making this up, folks) also comes through in a number of–sometimes disturbing–ways.

We the Underpeople is an absolutely incredible read that I would recommend to any and all fans of science fiction. The epic scope, beautiful style, and wonderful stories contained herein are well, well worth the price of entry. I’m pleased to say I’ve discovered a master writer I didn’t even know about. Thanks for putting a dragon on the cover of the second book, Baen books! Time to read the next collection.

-Not enough character development in some of the stories

Grade: A “A surprising, inventive collection of thought-provoking science fiction.”

One thought on “Book Review: “We the Underpeople” by Cordwainer Smith”