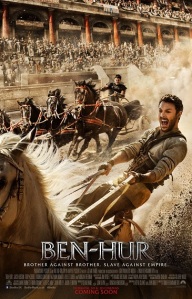 Let’s get this out of the way: this is not the same “Ben Hur” as was found in the wonderful version acted by Charlton Heston. In many key plot points and even some of the shared ideas, this is a different movie. I am reviewing this as a massive fan of the book (which I read annually) and the 1959 film. I went in with fairly low expectations, particularly regarding the poor early reviews. There will be some SPOILERS in the review that follows.

The plot summary that follows reveals some of the key changes from the previous film(s) and the book:

The basics of the plot are that Ben Hur is a Jewish prince whose adopted brother is a Roman, Messala. Messala goes to become a Roman soldier while Judah Ben Hur remains back in Jerusalem. When Messala returns, he wants Judah to help him track down zealot dissidents. Judah refuses, and when one of the dissidents attacks the new Roman governor, Pontius Pilate, Messala takes the whole Hur family into custody, sending Judah to the galleys as a slave. Judah escapes after a battle at sea and with the help of Sheik Ilderim, challenges Messala at a chariot race. He defeats his rival, disabling Messala for life. However, when he sees Jesus crucified and hears him call out forgiveness, Judah realizes his error and returns to Messala to ask for, give, and receive forgiveness. The two reunite and continue to live as brothers going forward.

Again, these are the plot basics and I don’t even touch there on the wonderful character of Esther or some of the other sub plots that occur in the film. For those familiar with the other versions, some of these plot points will be surprising. For me as a viewer, it was refreshing to see them not stick 100% to previously told versions. Some of these changes were for the better. Frankly, to show Messala and Judah reunite as brothers (though the adoptive brother spin was a bit much) at the end shows the forgiveness that is so central to the novel in a much better way.

However, some of the other changes were more difficult to swallow. For example, excising the story of Judah saving a Roman consul wasn’t necessarily a bad thing–it helps keep the pace going. But it also meant that there was little explanation for just how Judah became such a good chariot racer. Yes, he knew about horses before, but it is clear from the portrayal of conversations with Ilderim that he is a novice at chariot racing. How, then, does he suddenly defeat some of the best in the whole region of Judea? The film answers the question through tutelage from Ilderim, but it could have much more tidily and believably answered it by having Judah and Messala race chariots at the beginning of the film where they are portrayed racing on horseback. If he already knew about racing chariots, it would be much more believable. Small details like this are the main complaints I have with the plot. Overall, I think it did a great job capturing the spirit of the novel.

One of the other complaints with the film is the extensive use of CGI in some key scenes. Yes, the naval combat in the 1959 version has some dated elements, but it was awe inspiring to behold. Here, we have what is clearly an extended use of computer graphics rather than the epic way it has been filmed before. The chariot race was still pretty magnificent, but taking out the menacing teeth on Messala’s chariot and, again, using CGI to help flip the chariots around more cheapened it slightly. It was good; but not as good as the earlier version.

I liked that Esther had such a prominent role throughout the film, acting as a woman of faith and integrity throughout. Moreover, they showed women in the garden when Jesus was arrested, which almost certainly was the case given the number of female followers Jesus had. I also, as mentioned, enjoyed the strengthening of the Messala-Judah relationship. It helped show the them of forgiveness in a much more intentional way than was otherwise the case.

Frankly, it is this last aspect that I enjoyed most about the film- the wise use of various scenes to strengthen the worldview themes of the story in ways that didn’t bog down the film. It was so well-paced that I never felt bored or that something could have or should have been much shorter.

Overall, is it as good as the version with Charlton Heston? No. In my opinion, nothing could be that good. It’s my favorite movie ever. Is it worth seeing? Absolutely. It has enough differences to make it interesting, and it is done so smartly that it warrants repeated viewings. As I said I went in with low expectations, and those were lowered by early reviews. However, I enjoyed it quite a bit and felt it was a worthy reimagining of the story. I recommend it highly.

Religious Pluralism- A case study from “Ben Hur” by Lew Wallace– The post introducing this entire series on “Ben Hur.” It has links to all the posts in the series.

Ben Hur- The Great Christian Epic– I look at the 1959 epic film from a worldview perspective. How does the movie reflect the deeply Christian worldview of the book?

All Rights Reserved. Use of any elements of this post subject to approval by the author.