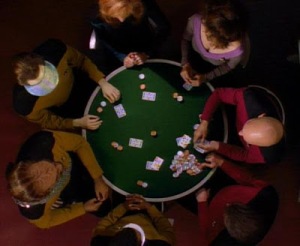 Picard is apparently traveling through time, encountering the crew of the Enterprise across different timelines. One constant, however, is a disturbance in the neutral zone. As Picard guides three different time periods to investigate the neutral zone, it becomes apparent that someone is tampering with things. Of course, it is Q. Q challenges Picard to figure out what is happening and blames him for the destruction of the entire human race. Ultimately, Picard must sacrifice the ship in each timeline in order to stop the destruction of humanity. Q, however, appears to reset things to normal, saying that Picard passed the test, for now, and that all good things must come to an end. Picard joins the crew for some poker at the end.

I was surprised watching this episode because for a long time it has been among my favorites. Yet, watching it for about the 10th time, I was watching it in order–at the very end of the entire series. Set against that backdrop, it remains a good episode, but there are plenty of episodes that are far better. That said, as far as a series finale goes, this was a solid way to finish. The very end–with Picard joining in the poker game–was a great way to send fans out on a joyous/nostalgic note.

They also did a good job kind of book-ending the series with a Q-trial scene. However, given that I didn’t think the first episode was very good, it didn’t bring back warm and fuzzy memories for me of that episode. It just seemed a little like a weird extension of the same. Q usually is weird, though watching the series in order has given me a better appreciation of his character than I had before.

The main problem here is there is so much going on. Is it a time-travel episode, a Q episode, a character-highlight episode, a mystery episode? It’s all of these and more. They tried to shove too many things into such a small amount of time and space that it feels totally full. Moreover, the episode loses some impact because the future/past timelines are unconnected with the present, so the neat glimpses into the future of the crew are effectively a wash. They aren’t “real” in the sense of happening to the universe we’ve been in and enjoying.

Hey, it’s been an awesome run! We made it all the way through. Time to relax for a bit, then start up Deep Space 9!

Grade: A- “It’s good, but convoluted to the extreme.”

Wife’s Grade and Comment: A- “It was a good episode, but they could have ended the series without Q.”