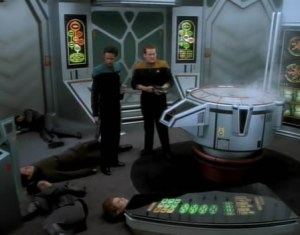 Well.. this is awkward.

O’Brien and Bashir are sent to aid T’Lani III in the destruction of a dangerous bioweapon that has helped to spur on endless warfare between two factions. After they manage to destroy the last of it, an attack apparently makes them disappear. To the crew of DS9, it looks as though they’ve died. However, Keiko O’Brien suggests that because Chief Miles O’Brien was drinking coffee later than he ever would, the recording has been doctored. Sisko and Dax go to T’Lani III to investigate. Meanwhile, O’Brien has been getting sick, apparently from a bioweapon, and Bashir continues to try to treat him as O’Brien helps Bashir repair a communicator. As Sisko and Dax investigate, they discover that the runabout O’Brien and Bashir used has been tampered with, opening the possibility that they are alive. The T’Lani find O’Brien and Bashir, and it turns out they’ve decided to kill them to erase any possibility of the bioweapon ever being constructed again. Sisko and Dax manage to grab the imperiled crew members and distract the T’Lani, escaping back to DS9 with their lives.

I thought this was a great character-building episode. One thing this episode highlights about DS9 as over and against TNG is that it is clear the relationships between characters are more complex. Yes, TNG is my favorite and probably always will be, but here in DS9 we have a relationship between two major characters that is not 100% amiable at all times. The relationship between O’Brien and Bashir is not caustic and awful, but it has tensions and is more depth to it than a lot of relationships on Star Trek in general have. It feels more real because of it.

The plot is pretty intriguing too, though a bit of suspension of disbelief is required for thinking the T’Lani would basically just start a war with Starfleet to preserve their peace after they’d just been assisted by Starfleet to get that peace achieved in the first place.

Overall, this was a great episode, and it built the heck outta O’Brien and Bashir as characters.

Grade: A- “O’Brien and Bashir are the best combination.”

Wife’s Grade and Comment: A- “Anytime Bashir and O’Brien face up, it’s gonna be great.”

Something’s not right. O’Brien is in a runabout fleeing from Deep Space Nine, narrating the strange things that have happened. Basically everyone aboard DS9, including his wife, has become very strange, acting as though something is wrong with him when in reality all of them are going nuts. He narrates the lengthy series of events that leads to his escape from DS9. Ultimately, he ends up walking in on a meeting between Sisko and some others, only to see another one of himself across the way. He tries to fire on the imposters, but is instead killed by a bodyguard. As he lays dying, he tells the now-revealed-as-real O’Brien to tell Keiko he loves her.

I kept getting shades of the classic “Invasion of the Body Snatchers” (an excellent film, btw) throughout this episode, only to have the whole thing overthrown at the end. It was an unexpected twist that, while a bit tough to swallow, made sense as an ending and was satisfying. I enjoyed this one a great deal, especially because I enjoy a good mystery combined with my science fiction.

The abruptness of the ending is quite jarring, however. It’s clear from the beginning something isn’t right. And of course you simply go along with the expectation that O’Brien is the reliable narrator when in fact it is he who is compromised. But it felt like there weren’t really enough hints throughout to fully sell the ending, that the narrator was the imposter. That’s maybe the only real problem with this episode. I still enjoyed it a great deal.

Grade: B+ “The ending is a bit of a stretch, but this is a pretty mystifying–in a good way–episode.”

Wife’s Grade and Comment: B “I like the premise, but I have a hard time believing they wouldn’t be better at keeping him locked up if they really thought they’d been infiltrated by a murderous spy group.”

Star Trek: DS9- For more episode reviews, follow this site and also click this link to read more (scroll down as needed)! Drop me a comment to let me know what you thought!