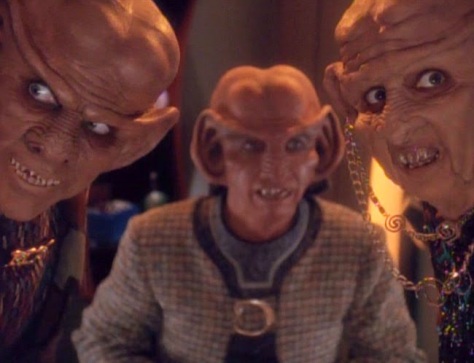 Summary of this episode in a single picture.

Commander Sisko decides to see if the ancient Bajorans really could have traveled the stars with some kind of Solar craft. He grabs his son Jake and goes off into the stars, though with the Cardassians opposing the journey–after all, the silly Bajorans couldn’t have developed space flight before the Cardassians, right? Naturally, something goes wrong, but with a little bit of luck the Siskos manage to finish their journey to Cardassia and are met with space fireworks.

“…and are met with space fireworks” pretty much sums up this episode. Is it silly? Yep. Is it lighthearted? Yeah. Is it fun? Absolutely. It’s the kind of silly aside that DS9 hasn’t done much so far, but that TNG (occasionally) excelled at. It also gave us some character development for Jake, which hasn’t happened much. One question I have is how the heck did Sisko manage to build this thing?

The side plot with Bashir agonizing over a class rival was interesting as well, but definitely as much an aside as it seems.

Not much more to say about this. Space sails and fireworks. Watch it.

Grade: A- “Lighthearted and fun, with a perfect ending to its silliness.”

Wife’s Grade and Comment: C+ “It was just so impossible to believe.”

Quark’s mom is under investigation for making money as a woman, a great crime in Ferengi society. Quark and Rom return home to help settle the business. She says she just wanted to make some money on the side. Quark tries to get her to sign a confession and make reparations, but she refuses. Rom manages to lie to both to get them to talk to each other. She finally agrees to pay back the money to please Quark. In reality, she tells Rom, she only gave a third of the money back, thus outsmarting everyone again. Back on DS9, Sisko meets a love interest Jake has been trying to set him up with, a certain Captain Yates.

Quark’s mom, Ishka, has committed an ultimate crime–she made profit. What? Ferengi oppose profit? Yes, if it’s a woman making it. This episode makes light of the serious problem that women across many fields are prevented from succeeding by, frankly, patriarchy. But it doesn’t make light in such a way as to dismiss it; instead, it’s a kind of satire that helps show just how ridiculous Ferengi society is for refusing to allow women the chance to succeed. Similarly, it suggests, we ought not limit people by artificial lines of possibility.

Also, this episode was ridiculous and fun. It’s quite a bit like the previous episode in its fun, lightheartedness, but also stands on its own.

Another great aspect is the revealing of more of Ferengi society, showing what it’s like on the inside and back home. Cool architecture and absolutely perfect moments like chairs requiring payment to use make the Ferengi even more believable. DS9 has truly developed this race from being a source of absurdity to something quite interesting.

Grade: A- “A fun episode with a not-so-subtle message. Also, I love Ferengi society–very interesting.”

Wife’s Grade and Comment: A “I just thought it was great. His mom has excellent business skills and he appreciated her for it before it was too late.”

Star Trek: DS9– For more episode reviews, follow this site and also click this link to read more (scroll down as needed)! Drop me a comment to let me know what you thought!