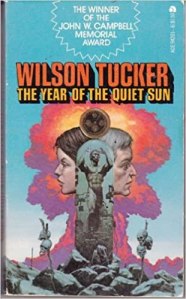 The Year of the Quiet Sun by Wilson Tucker

I like lists, so I’ve been reading through all the Hugo Award winners and nominees from the beginning. This brought me to The Year of the Quiet Sun by Wilson Tucker, an author whose work I’ve not read before. It’s about time travel. Time travel is difficult to do well, in my opinion. I’ve even written a piece on the problems I see in most time travel-related fiction. Basically, they tend to fall into the error of being historical fiction with some sci-fi trappings or going down the endless whirlpool of time travel paradoxes. Tucker completely avoids the first possible error and only touches the second. There will be SPOILERS in my discussion.

Basically, The Year of the Quiet Sun is a bleak story of the future. But there is much more going on in this pithy novel than that. Brian Chaney, a biblical scholar and demographer, is enlisted by Kathryn van Hise to go to the future in order to test a time travel machine. Chaney caused much controversy already in his publication of a midrash that predates the New Testament by a couple hundred years that appears to be the basis for the book of Revelation. That was a mistake. Now hated basically worldwide, he just wants a quiet life away from the public eye. Chaney and others are sent to see what the next election will foretell the current President. Such an act is so perfectly cynical in its political lack of finesse that it plays even better today than it ought. After all, who couldn’t see our current leadership using such a fantastic tool for such a short-sighted goal?

Anyway, they find that the President did get re-elected while also viciously crushing a coup attempt. But when the characters go forward in time even farther, they discover apocalyptic war and societal breakdown, resulting in the death of one character and Chaney finding the base from which he’s traveled in disrepair. When he speaks with Kathryn, he notes all the horrible events and how the time travel project itself essentially presaged them. He asks how he gets the information back in time to prevent the awful future he now faces, and Kathryn points out that because the nuclear reactor is burned out, he cannot return. And here we find that Chaney is, in fact, a black man and due to various ways the wars played out, he is distrusted completely due to the color of his skin. Kathryn, we find, is the only one who won’t be terrified of him purely based on his race. And thus big reveal, coupled with his own plight, is where we readers are left, contemplating the horror of the whole scenario.

The book isn’t flawless. It suffers from no small amount of misogyny. Women are mostly judged on their looks, and the word “cad” is used in a teasing light. Serial sexual harassment is funny, right? Wrong. Thankfully, this doesn’t become an overwhelming part of the narrative, though Kathryn never rises much above being a foil for Brian’s–and other characters’–fantasies. The *short) length and pacing of the novel are limiting factors. Leaving me wanting more isn’t necessarily a bad thing, but the slow burn at the beginning of the book sparks and explodes into the climactic scenes so swiftly that I wish Tucker had developed the actual time traveling scenes more fully. The final plot twists came in a storm that had me flipping back several pages to see if I’d missed something.

The edition I purchased of the book includes an introduction to the work which features a lengthy quote from Tucker about the novel in which he states that others have found themes in the book he didn’t intend to include. He doesn’t discourage this, but instead rather modestly basks in the wonder of having created something people read and enjoy so much. It’s a neat moment, but having read the theme that he specifically talks about–water as a recurring event that cleanses throughout the book–I can’t help but see it as a major theme of the book! This, despite Tucker denying it! But that’s what makes this book so good, in my opinion. Something that makes it last. It is completely full to the gills of these themes. What exactly is meant by the Qumran Midrash–somewhat erroneously taken as a fictional account rather than commentary–in the book? The parallels with Revelation are telling, and the lake of fire being paralleled by the literal lake of radioactive fire that was Lake Michigan’s future is also spot on. Is the finding of an ancient text disproof of Christianity? Tucker doesn’t push that narrative and in fact seems to be urging more care given to reading ancient texts and, interestingly, texts about ancient texts.

Then, the final twist: having Chaney revealed as a black man was surprising in many ways. First: it confronts readers about their assumptions. Yes, I assumed he was white because the book was written in the 70s as sci-fi. More to the point, I assumed he was white because I always assume main characters are like me. Intentional or not, this made me think about implicit bias and racism that can occur–something I’m clearly capable of being guilty of as much as anyone else. Second: the plot twist forces readers in to the uncomfortable position of thinking about their own racial fears. Third: it twists itself into circles because the black man is feared–exactly what is being confronted in America today and certainly no less so in the 70s when the book was written. It’s an ingenius twist that isn’t quite given enough time in the plot to stew and simmer. But that doesn’t take away its power. In fact, it may amplify it. The twist leaves readers with it as one of the final impressions in the novel and makes us think about it, discomfort and all.

The Year of the Quiet Sun is a somber, subtle read. It requires attention to details and searching for meaning. Tucker filled this book to the brim and overflowing with themes–intentional or not–that demand reading and re-reading and careful reflection. For this, I would consider it a masterpiece-level work. It calls for reflection. Read the book, please! Go! Do so! And do it with an open mind, ready to reflect. This isn’t a “fun read,” but it’s a great one.

10 thoughts on “Vintage Sci-Fi: “The Year of the Quiet Sun” by Wilson Tucker”