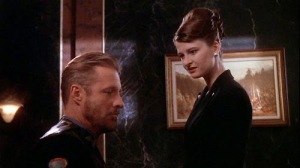 I am very late to the Babylon 5 party. As it came out, I was a bit young for the show and the few times we tried to watch as a family, it was clear we had no idea what was going on. After several people bugged me, telling me it was the show I needed to watch, I grabbed the whole series around Christmas last year on a great sale. I’ve been watching it since, sneaking it in between the many things going on in my life. It quickly became apparent that I’d want to discuss the episodes with others, so I began this series of posts. Please don’t spoil anything from later seasons or episodes for me!

21: Rising Star
Ivanova sits in the medlab mourning Marcus in some of the most emotionally wrenching scenes in the entire series. I don’t know what to say. I am devastated.

Back on Earth, Bester meets up with Sheridan in an attempt to find out about his lover and whether Sheridan sacrificed her for the sake of the battle. Sheridan angrily torches Bester’s motivations, but then reveals that Carolyn is still on Babylon 5. Sheridan also notes that Girabaldi is finishing personal business before he almost certainly will be coming after Bester. And we immediately get a quick scene showing us what Girabaldi is up to–tracking down Lise.

The interim President and Sheridan then have a conversation in which she basically forces him into two extremely poor options, either forcing him from command or bringing him up on a stacked jury for court martial. Sheridan says he will resign after the options are laid out. Sheridan, when he is given the chance to speak after  taking the deal, resigns only after stating that he loves Earth and that he is doing it for amnesty. I am sure there will be more to this.

G’Kar then follows up Sheridan’s brief speech with his bombshell that the League of Non-Aligned Worlds voted to dissolve and create its own, new alliance. Delenn explains that the Rangers will now be the ones guarding the safety and peace of the alliance worlds, as a White Stars fleet overflies the Presidential palace.

I knew it! Sheridan is the President of the new Alliance! I love this so much. It’s so fantastic. Oh my goodness what a fantastic scene when Sheridan gets to leave and see his dad. It’s absolutely beautiful. The scene shortly after with Mollari and G’Kar is another perfect scene in a series of fantastic scenes. I adore this show, so, so much. And the artificial eye missing from G’Kar? A bit creepy but also… so on character.

22: The Deconstruction of Falling Stars

So I read that Babylon 5 got cancelled about halfway through season 4, so they decided to wrap up the series in that season, tying off loose ends much more quickly than may otherwise have happened. But then towards the end, the network decided to renew the series for a 5th season after all. This meant that, apparently, they had to come up with more story for the upcoming season. This episode, it seems, is a way to lay the groundwork for that next season.

We see many news stories, talking heads, people debating the use of the Rangers after the fact, discussing Sheridan’s legacy, and more. The whole thing is presented in a series of cuts which is apparently someone watching all of these in a row. We finally see some insight into what’s happening as we see someone is trying to re-write history. They’re [unsure who “they” are here] using “goodfacts” as opposed to “realfacts” 500 years later, attempting to justify breaking out of the alliance in order to set up a preemptive strike and attack. But a holographic Girabaldi manages to hack the system and stop it just in time. Then, we jump forward another 500 years and see some monks talking about the events that happened in the interim. Earth has lost quite a bit of technology and no longer do humans ply the stars. Sheridan and others have become myths.

Finally, something like a million (!?) years after the events of the main series, we see someone sending all of these sequences off to “New Earth.” The episode ends with Delenn waking up next to Sheridan as they discuss whether they’ll be remembered in a a hundred or a thousand years. Delenn assures Sheridan history will take care of itself and they settle in together. End of season 4, one of the best seasons of television I’ve ever seen.

I honestly enjoyed it quite a bit, and despite some people saying they really don’t like season 5, I’m looking forward to diving in and seeing what happens next.