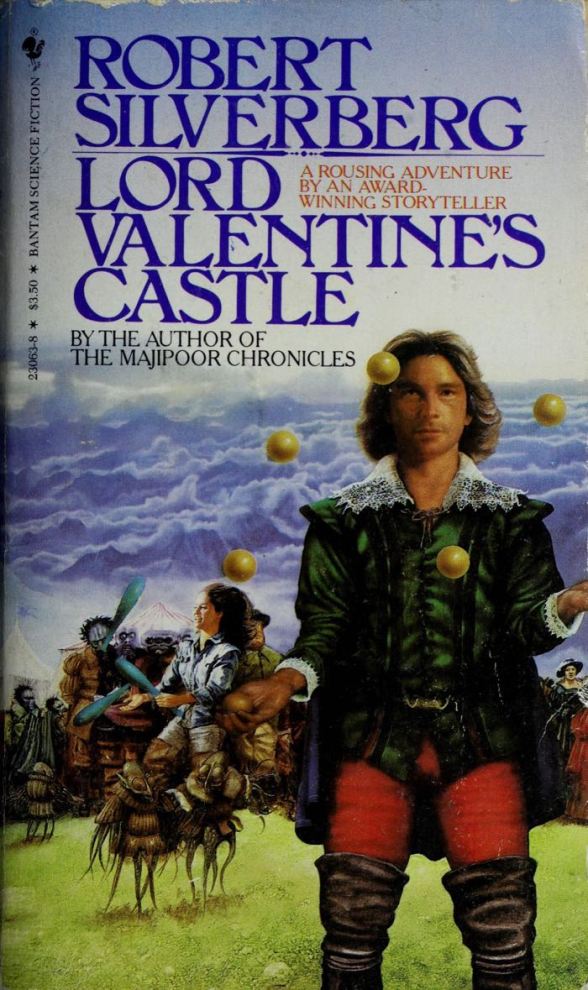 Vintage Sci-Fi Month is well underway, and I wanted to take a break to survey the books I’ve read to this point and offer some reviews as we go.

Lord Valentine’s Castle by Robert Silverberg
A science fantasy epic follows the story of Valentine, a man who’s memories have been repressed as he finds himself in a major city with a pile of coins but little knowledge of what to do. He becomes a juggler with a traveling party of humans and aliens for lack of anything better to do. As the novel goes on, layers of this fantastical world are peeled away and readers are swept into the adventure of Valentine as he rediscovers himself and his place on Majipoor. I used the terminology “swept” on purpose, because this is a novel that, if you’ll allow it, will take you up and carry you on an adventure across the massive planet. There are parts where the plot could drag, such as the lengthy descriptions of the juggling. However, if one lets oneself truly dive into those parts and see the flow, the rhythm, and the beat for what they’re intended to be, it’s enthralling. A slow burn read that builds on itself over its lengthy stay, I believe readers will largely get out of it the amount of emersion they’re willing to allow.

Dr. Bloodmoney, or, How We Got Along After the Bomb by Philip K. Dick-
acters go on a mind-bending journey and come out wrecked on the other end. It’s one of what I’ve identified as 3 types of books Dick writes. The first, and possibly most iterative strand is his “drugs are the answer” set of books. These became tedious to me after the first couple. The second strand is his “mind-bending don’t trust anything in the narrative” strand. It’s definitely the most enjoyable of the types of novel I’ve read from him, and includes the few I’ve enjoyed most. This one falls largely in this second category. The third category is the “I’m making up a pseudo theology in a (likely) drug-induced stream of consciousness with a bare bones plot threaded around it.” Dr. Bloodmoney is a fine enough read, but it takes quite a bit of work to get to the meat of it. There is so much going on that it becomes difficult to navigate after a while and turns into a bit of a chore to read.

Empire State by Samuel R. Delany
I have had a truly difficult time thinking what to say about this complex, puzzling read. Is it irrefutable proof that Delany is a master? Or is it incomprehensible? I’m not sure. I had fits of stops and starts with it, and I re-read several sections a few times. The core story is just an alien who crash lands and wants to be taken somewhere else by a simpler alien on the planet it crashed upon. There is so little information about some of the most important aspects of the plot that it becomes both baffling and frustrating at times. What is this information that is so important to take elsewhere? What about the enslaved aliens, what will happen to them? Why is the story a (seeming) loop? What’s going on with this aliens? None of the questions are really answered, either. The short novel (or novella, depending who you ask) is by turns fascinating and frustrating. I can’t decide if it’s a masterwork or a mess.

Half Past Human by T.J. Bass
pretty well within the current stream of dystopic fiction, though the flavor is much more in the vein of 1970s science fiction. Bass weaves in so many different strands that it is surprising he still takes a cohesive story. From what I understand, it’s a mashup of a couple novellas. At times, you can tell, but the larger narrative is interesting enough to carry the story through occasional disparate parts. Somehow Bass takes one of the classic sci-fi trope-like stories of having people wander around on an alien-seeming planet (which is Earth, in this case), and jams it together with a techno-advanced but weirdly backwards dystopic society narrative, then lumps together a few more ideas and then makes it all work. The more I reflect on it, the better I think it is. A forgotten classic.

(All links to Amazon are Affiliates Links)