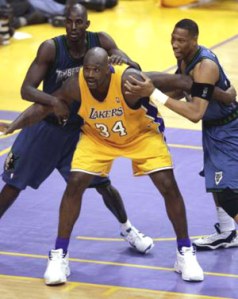 Hack-a-Shaq, begin! I do not own copyright for this image but could not track down the specific copyright holder. I use it under fair use.

I like watching Basketball, but goodness they need to change the late-game rules. First, the hack-a-Shaq maneuver [intentionally fouling the worst free-throw shooter on the other team the moment the ball is inbound] is ridiculous and draws the last two minutes of an even remotely close game out so much it takes like 30 minutes to get through. I know they can’t not call a foul, because it is an obvious foul. However, if there were something that stipulates that intentional fouls in late game scenarios like this means the other team picks who shoots the FTs might be a good idea. It’s super annoying. I know it’s an absurdly common strategy, but it’s a strategy that makes the late game nearly unwatchable.

Another proposal by a friend for a rule change is to, with 2 minutes left, automatically award the team that gets fouled 2 points and give the fouling team the ball, with some kind of clock runoff as a possibility. This would probably curtail the intentional fouling a lot, as it would have effectively no benefit.

Second, the egregious use of video review at the end to make sure that valuable .1 seconds are not lost is bogus. I was watching a college game the other night in which there were less than 2 seconds left in the game, one team was up by 3 points. The ball was inbound and then knocked back out. Video review was called and after 4 minutes (!) the referees changed the clock from .8 seconds to 1.3 seconds. This was with the team who was in the lead having the ball. Those .5 seconds meant all the world, as the team inbound the ball again and won immediately. I’m glad 4 minutes of my life were wasted for that /sarcasm [okay, I was running on an elliptical and listening to a Harry Potter book so it wasn’t really wasted]. But really, this garbage needs to end.

I understand that there is a desire to not let one wrong call blow a game, but that has to be balanced with the possibility of having many games get boring due to clock shenanigans at or near the end.

End the Madness… just not the March Madness.

So the NBA Finals are here and Game 1 resulted in a rather big win by the Spurs. I only watched part of the game in the 3rd quarter when it was fairly even but man I should have kept watching because I love watching the Heat lose. Sorry.

But then I remembered: oh no, the Finals are going to be one long series of pick-and-rolls because the Spurs are once more in it. Yes they’re an incredible team, and yes their bench scoring is great, and yes they ____ (fill in the blank), but the core of the Spurs’ game is to Pick-and-Roll. Sometimes this can be a thing of beauty, like when you watch a perfectly executed play result in a quick and easy bucket. But to watch it again… and again… and again…….. it’s mind-numbingly boring.

…Or at least that’s what some want you to think!

For myself, I see well-executed game plans as an exciting thing. If the Spurs can win simply by playing the basics well (and that’s something the Bulls have continually proven under Thibs), then more power to them! There’s something of a beauty when a team is able to beat down a bunch of superstars just by executing some of the most basic plays of basketball. It’s not flashy, but it gets the job done.

Anyway, what are your thoughts on the Finals? Are you happy to see the teams that are in it?

For myself, I would have been so pleased to see OKC in it, because I love Kevin Durrant. But alas, can’t win ’em all (I am a Bulls fan so I acknowledge that after living through the Jordan era, I may never complain about basketball)! Let me know what you think of the finals. Who will win?

My prediction: Heat in 6. And yes, that does kill me to say, and I’m rooting hard for the Spurs, but the Heat are too talented to let basics beat them again and again… or are they?