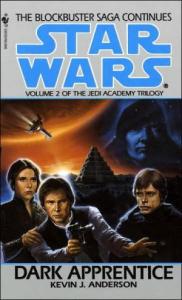 I have embarked on a quest to read through the Star Wars Expanded Universe once more. Be sure to check the linked text there to see other posts in this series. Here, Luke Skywalker continues his quest to found a new Jedi Academy in Dark Apprentice, the second book of the Jedi Academy trilogy. There will be SPOILERS in what follows.

There are two huge problems with this book, and they are largely interlinked. The first is that major characters act extremely out of character a number of times. The most telling example of this is when Han finds out Leia has been in an accident and his first reaction is to gamble with Lando Calrissian for who owns the Millennium Falcon. What? That seriously happened!

The second problem is that there is a whole lot of filler in this book. Unlike Jedi Search, which had a tight narrative that kept the action going, Dark Apprentice has heaping helpings of scenes where the characters do little other than wander around. Case in point: Jacen and Jaina Solo get lost and wander all around Coruscant while Chewbacca and C-3PO scurry around trying to figure out what to do. Once more, this also demonstrates characters acting out of character. It is unthinkable that C-3PO would fail to follow protocol so obviously (he’s a protocol droid!) and that Chewbacca would refuse to do all he could (i.e. notify the authorities) to save the children of them an to whom he owes a life-debt. Going back to the example of gambling above, an inordinate amount of time is spent with Lando and Han going back and forth on who owns the Falcon and gambling away time. These two problems are severe, and make Dark Apprentice feel very much like an in-between book, just taking up space rather than moving the narrative forward.

On the other hand, Anderson does a better job in this book of developing more of the side characters. Notable examples are Kyp Durron and Admiral Ackbar, who each get enough development to feel more real than they did before. However, even Durron is shorted time in the spotlight due to the aforementioned filler material.

The plot of Dark Apprentice feels very much like a placeholder as well. Yes, the development of Durron and his seemingly swift fall to the Dark Side was interesting, but it happened so fast that it was difficult to get into it as much as I wanted to. Other than that, little seemed to happen. A few plot twists were thrown in, and the setting up of Ackbar to take a fall in order to try to split the New Republic was the best moment of the novel. These moments of brilliance make the amount of silliness harder to swallow. It’s one thing to have scenes that resonate with the “fun” of the Star Wars universe, but it is another to do so at the cost of the overall plot.

Dark Apprentice is a filler book. It is particularly frustrating to read this one following the excellent Jedi Search. It feels like so much more could have been done with the plot and characters. Unfortunately, there were too many tough-to-swallow moments.

+Side characters get chances to shine

Grade: C- “I expected more after the first entry. ‘Dark Apprentice’ has too little going on to make it a suitable follow up to ‘Jedi Search.'”

Reading through Star Wars: Expanded Universe– Here you can read other posts in this series (reviews of other EU books) and make suggestions about what I should include in my reviews.

There are other posts on science fiction books to be found! Read them here.