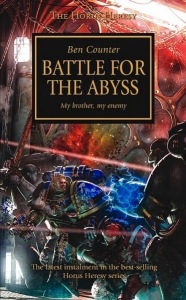 I know I’m late to the party, but I finally decided to start reading the “Horus Heresy,” a huge series of novels set in the universe of Warhammer 40,000 (though it is set much earlier than the year 40,000). I thought it would be awesome to blog the series as I go. With more than 50 novels and many, many short stories, there will be a lot of posts in this series (I doubt I’ll get to all the short stories). I’m reading the series in publication order unless otherwise noted. There will be SPOILERS from the books discussed as well as previous books in the series. Please DO NOT SPOIL later books in the series.

Battle for the Abyss by Ben Counter

The setup for Battle for the Abyss is exciting: a heretic fleet is dispatched to destroy the Ultramarines’ homeworld, and the outgunned Ultramarines must try to chase down the spearhead of the assault, the Furious Abyss and stop it before it reaches Ultramar. The Word Bearers–the heretics–continue to be the more interesting characters in the series, with their lore coming front and center at multiple key points throughout the novel. By contrast, the Ultramarines in the novel are sympathetic for being in a sort of David-and-Goliath scenario, but are otherwise not very interesting.

The action and fighting is intense throughout the book, though it’s not always clear what ends are being pursued beyond merely having more action scenes. The added complexity of daemons from the warp make for a more interesting battle, but also seem to take away from what could have been a compelling heretic-loyalist conflict. Instead of having the focus be on loyalties upheld and broken, it changes it to a three-way fight for survival alongside the other, more personal conflict.

Unfortunately, like some of the other books in the Horus Heresy, this one reads very much like a short story that overgrew the bounds of a novella and was pushed into the length of a novel. There are far too many scenes of exposition, too much standing about making decisions, and surprisingly little by way of character development given the page count. For this book to work as a novel, there needed to be much more character development of some of the main actors. As it stands, they feel mostly like cardboard cutouts set up simply to be knocked down.

Battle for the Abyss is a competent entry in the series that suffers the defects of several of the other works in the series. That said, it is also one of the more action-packed works in the series to this point, which moves it along swiftly enough. In my opinion, the problems in the book somewhat outweighed the great ideas and setup.

Horus Heresy and Warhammer/40K Hub– Links to all of my Warhammer-related reviews and writings can be found here.