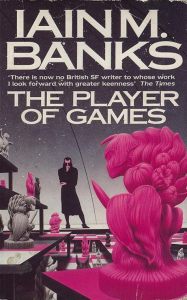 71. The Player of Games by Iain M. Banks (1988) Grade: A+
“Banks is a marvelous writer with stylistic flair and skill that is nearly unmatched. This story of a man who really just wants to play games develops as a slow burn, but touches on questions and ideas that are rarely even considered in science fiction. It is nearly impossible to describe how stunningly unique some of Banks’ ideas are. I mean this truly: there are ideas in this book which take a page or so to describe and are never touched again (i.e. they are used as ‘flavor’ for the universe) that could easily make a series of novels well-worth reading. Sure, there might be one point in this book that makes it difficult to believe a character would act the way that character does, but that small flaw does not keep this form being among the greatest science fiction novels of all time.”

72. A Princess of Mars by Edgar Rice Burroughs (1912) Grade: A
“It’s campy, classic, and fun. Burroughs created a world in which a cowboy can rule Mars. This is a classic for good reason. It has tremendous action and adventure all the way through, with just the barest nods to how silly it can be at times. More importantly, Burroughs managed to combine that action with a pretty interesting overarching narrative that continues through the series. The core of the story is obvious, but the window dressing is superb. It’s the kind of book that is fun to read all the way through. It’s excellent.”

73. Doomsday Book by Connie Willis (1992) Grade: A
“Sometimes a book’s plot and characters are so raw, so emotionally captivating, that you’re willing to look past even major flaws. Doomsday Book was such a book for me. There are some big problems here, such as the fact that the first 300 pages or so of the ‘future’ time period is taken up with people running around trying to get a hold of others on landline phones or passing out just before they convey some absolutely essential piece of information. A couple times? Not too bad. Constantly? It starts to get old. But throughout this first section and through the end of the book, the story of a lone historian, Kivrin Engle, is utterly enthralling. She finds herself trapped in the midst of untold suffering of the Black Death in England, sees the struggles of the everyday people in the 14th Century, witnesses genuine faith, feels complete hopelessness, and more. Throughout it all, I could not put it down. It was so emotionally rich that it felt like I must race to the conclusion lest I lose myself utterly. It’s a fabulous story that transcends whatever flaws accompany it.”

74. The Road by Cormac McCarthy (2006) Grade: B+
“I truly do not understand why there is so little punctuation in this book. For that, it gets knocked down a few notches. I read about how ‘concise’ and ‘clean’ this type of prose is, but I think that if something is written such that I would have received an ‘F’ on it in English class, there’s a problem. That said, McCarthy’s take on the post-disaster genre is interesting, mostly for its incredibly narrow focus on two characters who have apparently no impact on any wider events. It’s unrelenting in its bleakness, and I love me some bleakness. It’s dreadfully sorrow-filled, but ultimately offers the barest glimpses of hope throughout. Disturbing, but beautiful. I enjoyed it, even though I was really annoyed when there weren’t quotation marks.”

75. Citizen of the Galaxy by Robert A. Heinlein (1957) Grade: C
“I thought the start was promising regarding the characters, but it didn’t develop much of a plot. Yes, things happen, but despite some rather world-shaking revelations, all of it is delivered in a rather mundane style that makes it difficult to connect to the wider events. It’s an interesting story, overall, but one that wasn’t executed as well as it could have been.”