This picture is everything.

Here, my wife and I offer a look at the best and worst parts of Season 4 of TNG! Feel free to chime in to let us know what you thought. There are SPOILERS for Season 4 in what follows.

J.W.: Odan from “The Host“- seductive male with plot twist weirdness! We’ve seen this one a bunch of times already.

Beth: Ardra in “Devil’s Due“- she was manipulative and evil.

J.W.: All Cardassians. The introduction of this new race and culture in “The Wounded” is a huge step for the series and sets up so much drama later on.

Beth: Picard’s sister-in-law from “Family“- she loves her husband and is committed to him and Picard being reunited as brothers.

J.W.: Jean Luc Picard- Time and again it was Picard’s character who made an episode, saved the day, or delivered the emotional punch in this season. Data and Worf certainly had their moments, but not as many as the Captain.

Beth: Jean Luc Picard- he displays a remarkable degree of versatility and acting skills in the range of things that happens to his character.

J.W.: The ending of “The Mind’s Eye” when Geordi is forced to realize how manipulated he has been through a genuinely good counseling session with Troi.

Most “Huh?” or Awful/Worst Moment

J.W.: The “big reveal” of Odan as a weird alien thing that just uses human bodies in “The Host.” How long have they enslaved this species?

Beth: That Picard is escorting Wesley to go to the academy in “Final Mission“- weird that the captain would get sent to do that.

Beth: “The Drumhead“- it didn’t really seem that plausible–suddenly, an Enterprise witch hunt; the end.

J.W.: I debated this for a really long time with myself. “The Wounded” is epic and introduces an entirely new enemy in an awesome way. All Worf episodes were amazing. “The Mind’s Eye” has so many cool moments. But ultimately, I have to go with what was the biggest surprise for me- “Family.” I didn’t like the episode when I was younger, but time and again I’ve thought about it since I re-watched it for this run through. It’s touching, it’s dramatic, and it’s so character driven. Amazing, amazing episode.

Beth: “Qpid” – It was thoroughly delightful from beginning to end.

J.W.: A “When the hardest part of this review is deciding the best episode, you know a season was done right. A fantastic season in an increasingly awesome series!”

Star Trek: The Next Generation Season 2 Awards– Swing on by to take a look at the awards for Season 2. What do you think of the selections?

Star Trek: The Next Generation Season 3 Awards– Don’t forget to also look at the Season 3 awards! 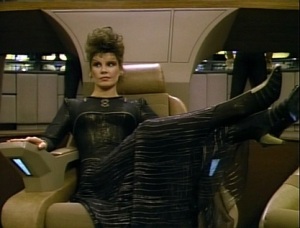 “Oh…. this is YOUR seat? I wouldn’t have guessed!”

The Enterprise must deal with a hostage situation that involves a whole planet being held against a contract which allegedly places them in slavery to a mythical figure–Ardra–in exchange for the 1000 years of peace they have enjoyed. Ardra herself allegedly shows up and has lots of tricks to back up her claim. However, Geordi’s diligent work leads to the discovery of Ardra’s ship and an epic showdown as Picard embarrasses the woman claiming to be Ardra in court through use of her own powers.

“Devil’s Due” is an interesting premise. What would happen if someone used the powers of a starship for something like, say, imitating a malevolent deity? It seems like the perfect con, and “Ardra” almost gets away with it here. Picard, however, is determined to intervene.

The main plot is nothing special–it just serves to set the stage for Picard and Ardra to have a showdown over the fate of a planet, with Data moderating of course. It’s fun, and even though we know Picard will ultimately win, Ardra gives him a run for his money and some good points of hilarity are found through the episode.

The incredulity factor is a bit high in some of Ardra’s uses of her ship. How, for example, did she make the Enterprise disappear or move? How did she show up in Picard’s quarters and disable functions of the computer? These are largely left unexplained. It’s not like we need a thorough explanation of everything, but it would have been interesting to see how she managed to get so powerful in these specific ways.

“Devil’s Due” is a solid episode. It’s not spectacular–the premise is a bit too thin for that–but it’s the kind of fun filler episode that is pleasant to have come along once in a while.

Wife’s Grade and Comment: B+ “It was fun to see Captain Picard and his crew problem solve to demythologize Ardra.”

The Enterprise encounters something that causes the crew–sans Data–to go unconscious and wakes up apparently 30 seconds later. However, as the crew continues to try to figure out what happened, a number of incongruities in the story pop up, and Data falls under suspicion for concealing the truth. He finally admits to Picard that Picard himself ordered Data to deceive them, and a powerful entity is at work here–one that will destroy the Enterprise simply for knowing about its existence. Picard convinces the entity that they will succeed if they try again, and they proceed. This time, no clues are left behind and only Data knows the truth in the end.

“Clues” is another one of those episodes with a really solid mystery at its core. What happened in the lost day? Why is Data apparently concealing facts? The episode also introduces the various little inconsistencies in the story in ways that continue to build the mystery rather than revealing it all at once. At the beginning it seems like it is some probably benign mishap that Data possibly suffered, but as the episode continues a sense of foreboding builds that is all-too-often difficult for a show like TNG to pull off.

The best part about this episode, though, is that unlike with the recent “Future Imperfect,” “Clues” manages to wrap up the story satisfactorily. Simply seeing Data, knowing that he will take the terrible secret with him forever, is an extraordinarily bleak ending that wraps the episode up perfectly.

Grade: A “Here’s how an episode with a mysterious main plot should wrap up.”

Wife’s Grade and Comment: B+ “It was a good premise and interesting story but it would be nice if they body-snatched someone other than Troi every once in a while.”