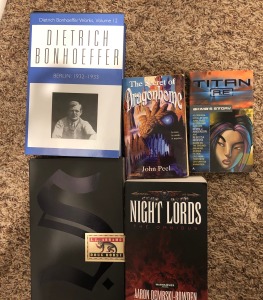 Over at the “Little Red Reviewer,” “Redhead” has been posting a “Five for Friday” feature on five random books from her shelves to discuss and encouraging others to do so. So here, I go. Following (directly, as quoted in the link)  her rules:

The only things these books have in common are:
-they were on my bookshelf
-I’m interested in your thoughts on them

This random mix was actually what was nearest at hand on my shelf, though I was already carrying the Bonhoeffer book to bring downstairs to read.

The Secret of Dragonhome by John Peel (1998)
I got this out of a Scholastic catalog at school and adored it so, so much. It was one of the first books that truly opened my eyes to the wonders of fantasy, making me realize more lay beyond Narnia (which are, of course, excellent books). I was desperate for a sequel when I finished. To be fair, the book is basically stand-alone, but a sequel did come out in 2011. I have it sitting on my shelf, afraid to read it because I adored this book so much. I re-read it as an adult and it still enthralled me. Were you blessed by running into this novel at a young age? Anyone read the sequel?

Dietrich Bonhoeffer: Berlin 1932-1933 Readers of my other site will know I’m a bit of a fan of Dietrich Bonhoeffer, the German theologian who was executed by the Nazis. I have been reading through his collected works, trying to match them up chronologically as I go. Excited to dive in. Any other Bonhoeffer fans?

Titan, A.E.: Akima’s Story by Kevin J. Anderson (2000)
Titan, A.E. is one of my all-time favorite movies and is, in my opinion, criminally underappreciated on sci-fi lists. A few years back I learned Kevin J. Anderson wrote a couple novels in the universe to set the story, but again, have been afraid to dive in. Anyone read this prequel to the film? Enjoy it?

“S” by J.J. Abrams and Doug Dorst (2013)
Saw a coworker reading this right when it came out and thought it looked really interesting. Then, got it for a gift at Christmas out of the blue! But I’ve never managed to bite the bullet and take it up and read. The concept is what intrigues me: multiple readers scrawling notes in the margins to put together a mystery for you, the actual reader. It fascinates me. I’m curious as to others’ opinions.

The Night Lords Omnibus by Aaron Dembski-Bowden
A collection of three novels and some stories from the Warhammer 40k universe. Deal with it. I love this fictional setting. It’s grimdark and awesome. I’ve only read the first novel so far and felt a little bit lukewarm about it. I’ve only heard great things from fans, though, so I may take it up again, though I probably need to re-read the first one. 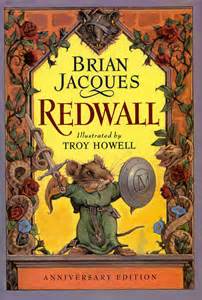 I had an awesome dream a few nights ago. Before I’d gone to work, I was paging through a book I’ve been wanting to read for a while* [see end of post for more info on the asterisked portions] and it mentioned another theological topic.** I remembered I once owned the book it cited*** and I wasn’t sure if I still had it (I thought I may have sold it). But then I had to leave for work so I wasn’t able to look for it. I got home very late and fell asleep pretty promptly (I am an expert at sleeping).

I then had the most wonderful dream in which I was desperately searching for the book that was cited in the other because I NEEDED it because… well, you know, books. I think there was some other desperate reason I needed to find it, but during the dream I felt the primary motivation was because I wanted to read it and I was really hoping I hadn’t sold it. I knew where to find it but I didn’t spot it. However, I did find a boxed set of the “Martin” storyline of Redwall

books (if you don’t know them, you should–they’re wholesome, awesome, fascinating reads for young adults/children). These books were not actual Redwall books, though. They had titles like “King” and “Kingmaker” and “Mariel the Queen” [the last is most similar to an actual title]. They were in a gorgeous box set and they all featured art which looked like Redwall but they had a gold foil over them. Their spines combined to make a beautiful panoramic of Redwall Abbey and the surrounding forest.

But most importantly of all, there was a Redwall book titled “Bonhoeffer.” Yes, my subconscious concocted such a delightful fantasy as a Redwall novel in which one of the characters was a mouse styled after Dietrich Bonhoeffer, the wonderful German theologian who was executed by the Nazis for his opposition to Hitler. Oh yes! I can’t help but desire to flesh out his story more. Perhaps there was this little field mouse who stood up against the evil Wolf named Lupis Hitlerus or something like that. The Bonhoeffer mouse would have glasses like the man himself did, two circles, and he would look very German (or as German as a mouse can look). Lupis would be viciously persecuting red squirrels because he didn’t like how they looked. Bonhoeffer-mouse would defeat the Wolf in his own self-sacrificing death by inspiring others (probably badgers shouting “EULALIA!”) to come to whatever land he lived in and save the squirrels. Can you say EPIC FAN FICTION? I can.

As my wife noted, Bonhoeffer’s name could be “Bonhopper” and he could be a hare. However, my subconscious made him a mouse, and that is what I would envision him in Brian Jacques’ world. Though the name Bonhopper would be pretty fun…

Anyway, I did wake up and immediately pulled over a step stool to find the book that had been cited. So not only was the dream amazing, but I also actually did have the book! Fantastic!

What’s the strangest combination your subconscious has come up with for a dream?

**The Third Use of the Law

***Law, Life, and the Living God: The Third Use of Law in Modern American Lutheranism

Check out my main page (J.W. Wartick- Always Have a Reason) or like me on Facebook for discussion of theology, philosophy, movies, apologetics, and more!