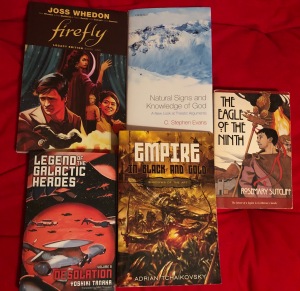 Over at the “Little Red Reviewer,” “Redhead” has been posting a “Five for Friday” feature on five random books from her shelves to discuss and encouraging others to do so. So here, I go. Following (directly, as quoted in the link)  her rules:

The only things these books have in common are:
-they were on my bookshelf
-I’m interested in your thoughts on them

This go-round, I grabbed what was nearest at hand, along with one book from my “to read” nonfiction basket.

Firefly Legacy Edition Book One (2018)
I love Firefly. I recently re-watched it for the first time in too long and the feeling when it ended was very much empty. I saw that this collection of Firefly graphic novels was coming out, and sprung for it and the second. Of course, I still haven’t read it. I clearly need to. Anyone read these comics?

The Legend of the Galactic Heroes: Desolation by Yoshiki Tanaka (2018)
This is volume 8 in the 10 volume Legend of the Galactic Heroes series. Better known for its anime (that’s still hard to track down, sadly), this is a  military space opera that feels like an anime when you’re reading it. Unfortunately, it hasn’t made as much a splash in English as I was hoping it would. But these novels are truly enjoyable. They have a very different feel from most military sci-fi in English, and the scale is really anime–like thousands of ships battling each other. I love it.

Natural Signs and Knowledge of God by C. Stephen Evans (2010)
I read this book back when it came out, but want to re-read it. Evans gives a different perspective on theistic arguments than is often offered. He doesn’t fall into the trap of seeing them as entire, clear proofs. I am interested in the re-read but I probably won’t get to it for a long while yet.

The Eagle of the Ninth by Rosemary Sutcliff (1954)
I fell in love with Sutcliff’s books as a child and have re-read many of them several times. This one is probably my favorite, and there was an okay movie made out of it (The Eagle). Anyway, Sutcliff writes truly grounded historical fiction, largely centered around the Roman Empire. Anyone else read her stuff?

Empire in Black and Gold by Adrian Tchaikovsky (2008)
The first book in Tchaikovsky’s “Shadows of the Apt” series, this novel shows his immense talent across the board. The premise includes humans divided into various “kinden” that have various abilities of insects, something of Tchaikovsky’s specialty. It’s a truly epic fantasy series (10 books long!) and I’m on book 6, so far loving every minute. I’m glad I dove into this after reading the superb Children of Time by the same author.