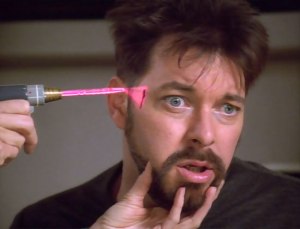 Riker is having a rough day.

The episode opens with Riker apparently in an insane asylum, being told that he needs more treatment because he apparently hurt someone. Turns out he is just practicing for an upcoming play on board the Enterprise. However, he wakes up later and it appears he is actually in an asylum that looks exactly like the set back on the Enterprise. As he tries to figure out what is going on, he continually shifts back and forth between the Enterprise and the asylum, trying to piece together what is real. He becomes convinced that the asylum is real, but then is apparently rescued by Dr. Crusher and Worf. Even this reality breaks down under investigation, time and again, until he finally awakens in the middle of some kind of brain surgery and manages to signal the Enterprise to rescue him.

This one is like an episode of “The Twilight Zone.” It’s all over, with layer after layer of reality being peeled away throughout the episode until it is difficult to keep up. But it is never overwhelming, nor does it ever falter. “Frame of Mind” is a truly intense episode throughout.

There doesn’t seem to be a lot to actually comment on here, because the greatness of this episode is found in the suspense it carries through, not in any kind of depth of plot or characters. Riker, however, carries this episode quite well. It is not difficult to imagine become disillusioned with one’s own reality under the kinds of pressure that are shown being applied to his mental life in this episode.

So…. yeah not a lot to say but this is great viewing.

Grade: A “A great mystery that kept unveiling new layers in such a way as to keep the plot moving.”

Wife’s Grade and Comment: A “It was very well done.”

Dr. Crusher talks with Guinan about her attempts to facilitate scientific discussion between a Ferengi scientist who has attempted to develop shield technology to allow travel much closer to stars than ever before possible. However, in the process one scientist apparently dies in a test flight, and the Ferengi turns up dead himself, apparently in a suicide. Crusher attempts to further her investigation, but is thwarted at every turn, including by a direct order not to perform an autopsy. Guinan convinces Crusher to keep up the investigation, which leads to Crusher commandeering a shuttle to see if the Ferengi’s theory works. It does, but the scientist who apparently died in the test flight isn’t dead… and attempts to kill Crusher, who takes him down and manages to return to the Enterprise.

The narrative that Dr. Crusher gives to Guinan as she describes her efforts as a scientific diplomat makes this episode have a little bit of a noir feel, and I love that. The plot itself is pretty strong, too, as we have not just the mystery of whether a specific invention might be viable to deal with but also a possible murder mystery.

It was fun seeing the plot develop and keep getting more and more interesting. I for sure thought that the Vulcan and/or her husband were responsible for the Ferengi’s death, so it managed to throw me off the scent despite having seen the episode before (hey, it was a long time ago, so I didn’t remember, okay?). The pulpy feel along with the complexity of the actual mystery are paid off pretty well with an ending that doesn’t feel too contrived. It’s just a really solid episode with some excellent work by Dr. Crusher. Plus she gets to roundhouse kick an alien in the face. How epic was that?

All of the positive feelings aside, there are some problems with this one. For one, how the heck does the apparently dead alien scientist manage to keep leaving the morgue without anyone noticing he’s walking around on board the ship? For another, if the Enterprise constantly monitors people’s condition and where they are on the ship, why have they still not integrated some sort of security system into that? Why doesn’t Crusher have more severe consequences (like getting thrown in the brig) for her clear disobedience and insubordination at points?

Ultimately, my answer to these questions was “Who cares?”  because the episode was too fun to let myself get bogged down with these concerns about plausibility.

I’ve been reading through the Star Trek TNG 365 book, which is excellent, by the way, and apparently the authors and the writers of the episode itself thought this one wasn’t very good. Well, you can probably tell from my comments–and our grades below–that we loved it.

Grade: A “Some hard to believe moments don’t do much to drag this one down. Another suspenseful episode.”

Wife’s Grade and Comment: A- “I enjoyed it. Crusher was a fun detective, but it felt a little odd for a Star Trek episode.”