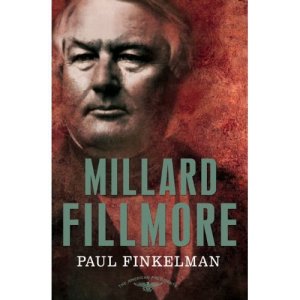 My quest to read (at least) one biography per President continues with Millard Fillmore, the thirteenth President of the United States. The biography I chose with my selection process (reading reviews online and utilizing and this website- My Journey Through the Best Presidential Biographies) was Millard Fillmore by Paul Finkelman.

Here, I’ll offer my thoughts on that biography, and proceed to present my official ranking for the DEFINITIVE RANKING OF PRESIDENTS OF THE UNITED STATES!!!!!! The full list of the rankings with all the Presidents as well as comments on their careers, updated as I read through this list, may be found here.

Millard Fillmore’s story may be seen in a number of ways: his story was a truly “American” story where someone rises from absolute poverty (his parents were tenant farmers) to the highest office in the United States; or perhaps the narrative is of one who sought above all else to preserve Union in a time when pressure was increasing to split it; perhaps, instead, the narrative is of one who, having Southern interests at heart, pursued them with all his strength. Regardless of one’s thoughts on his life, it is clear Fillmore left a mark upon our country, for better or ill.

Fillmore’s story is interesting because he did seemingly pull himself up by his bootstraps (again, the traditional narrative of what people say happens in the United States, but rarely does), educating himself and becoming a lawyer. He got involved in politics in Buffalo, New York, and became a Representative.

Millard Fillmore’s ascent to the Presidency was unexpected, to be sure. He was the second “Accidental President” to happen, upon the death of Zachary Taylor. Added to the ticket as the Vice President, the Whig Fillmore was expected to help carry some of the Southern vote, and he did. However, he was not expected to become President in a time where the Vice President was largely a placeholder office. Yet when Taylor died, the nation was in the throes of some enormous sectional battles, particular among them that “peculiar institution” of slavery.

Millard Fillmore expended an enormous amount of energy to defend slavery. Though he decried it repeatedly as an evil–or at least morally wrong–he used both federal resources and his own power as President to pursue the ends of slaveholders throughout the United States. The Compromise of 1850–something that may have been vetoed under Taylor–was rubber stamped and pushed by Fillmore, who spent the rest of his Presidency eagerly pursuing the cause of the expanded Fugitive Slave Act. He repeatedly used federal soldiers to aid in forcing people back into slavery and allowed interpretations of the Fugitive Slave Act that led to the kidnapping and forced entry into slavery of any number of black people. His Presidency was shaped by this constant use of federal power to impinge upon states’ rights. Of course, the false narrative of “States’ Rights” that persists to our time regarding what divided the North and South is shown here in stark relief. Southerners weren’t out in the streets demanding states’ rights when federal troops marched into major cities in the North to assist in the kidnapping of black people. Fillmore endorsed and pushed these events forward, and states’ rights were trampled.

Some have read Fillmore’s pursuit of the Fugitive Slave Act and other parts of his Presidency as showing his unflinching commitment to preservation of the Union. On this scheme, Fillmore was enforcing a law that, if left alone, would led to the secession of the South. This narrative, though it paints Fillmore in a more positive light, seems to go against the thrust of his Presidency, which was filled with explicitly racial bias and intentional thwarting of the rights even of American citizens in favor of Fillmore’s favored people.

Another example of this played out in foreign policy, as Fillmore’s pursuit of a treaty with the Swiss included compromising the rights of Jewish Americans. His pursuit of economic success of those whose interests he protected superseded his commitment to defending all Americans abroad. The Swiss treaty included provisions for allowing citizens of both Switzerland and the United States to travel freely between the countries, but it allowed for the Swiss cantons to prohibit Jews (including Jewish Americans) from conducting business in or visiting specific juridictions. Fillmore, commenting on this treaty, said he found “nothing to object to,” even after concerns were raised on the floor of the Senate. On the other side of the world, Fillmore pursued an America-first policy that eventually (under Pierce) forcibly opened Japanese ports to American trade. Though this certainly benefited some portions of the United States financially, it was an imperialist, expansionist move that was well in line with Fillmore’s apparent policy of putting white American interests above all else.

After his Presidency, Fillmore joined the Know-Nothing party and helped push their anti-Catholic, anti-immigrant nonsense on the national stage. It was as though the clear white-first ideals he demonstrated in office weren’t explicit enough: he simply made them clear in further actions.

Finkelman’s summary of Fillmore’s legacy is on point:

[O]n the central issues of the age his vision was myopic and his legacy is worse. He opened the West to slavery and destroyed the Missouri Compromise line. The total appeasement of the South only encouraged new demands for more land for slavery… He ran for president on a ticket that openly attacked foreigners, immigrants, and Catholics. In reteriment, Fillmore opposed emancipation and campaigned for a peace that would have left millions of African Americans in chains. In the end, Fillmore was always on the wrong side of the great moral and political issues of the age: immigration, religious toleration, equality, and, most of all, slavery. (137)

Fillmore was a terrible President.

Millard Fillmore (13th President- Original Ranking: 13)- Fillmore put into practice those horrors that Jackson set up, for the same reasoning. He protected the interests of those he cared about: nativist racist whites. He allowed for the stripping of Jewish American rights abroad. He pursued the Fugitive Slave Act with the vigor of one who saw it as the highest good. He used federal resources time and again in defense of slavery. After his Presidency, he joined the Know-Nothings so that he could let his nativism truly shine, with their anti-Catholic, anti-immigration rhetoric that spread fear in order to pass policies that favored wealthy white protestants. He was a tool of slaveowners and, when he had power, he used it to full effect in ways that demonstrably did not assist all Americans. He was a terrible President whose only interests were those of expanding the influence and economic success of the narrow sphere of people he felt deserved it.