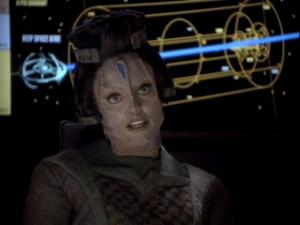 I have a particle accelerator shooting out of my brain. Your argument is invalid.

A pair (later a triad) of Cardassian scientists arrive on board DS9 to try to set up a way to communicate through the Wormhole. Meanwhile, Vedek Yarka, a somewhat controversial religious leader on Bajor, argues that the Bajoran scriptures prophesy this very event as a calamity that will deeply impact Bajor. Starfleet and the Cardassians press on, however, despite some superficial similarities between this prophecy and current events. When things start to go wrong and it appears the Wormhole is in danger, support for Yarka’s interpretation surges. However, one of the Cardassian scientists finally outs the third, who is revealed to be a member of the Obsidian Order, the Cardassian intelligence group. She was trying to sabotage their efforts. With that out of the way, the plan proceeds and, unexpectedly, some filament science magic happens and the communications are able to be established. Sisko, Kira, Yarka, and others see this as the prophecy being fulfilled in an unexpected way they could not have predicted.

I thought this episode was a breath of fresh air. We’ve had Star Trek deal with religion plenty of times before. It hasn’t always done so well. In this one, genuinely interesting questions of interpretation of prophecy are brought forward. Who gets to arbitrate such interpretation? How much should we look at current events to try to figure out what prophecies mean? Can a prophecy really be true? These are just some of the questions briefly touched on in this episode.

Okay, a bit more on this one. The plot is fairly bare-bones overall–the meat is spent on the analogues to the prophecy–but it does the job of carrying the episode when it needs to. There is just enough question of whether the prophecy might come true or not that as a viewer you keep wondering which direction it will go. The ending is perfect, showing that we very often read our own perspective onto those things which we read.

Grade: A “I found this a surprisingly good look at how religious groups may interpret their scriptures differently, and how events that are happening here-and-now can change that. It was remarkably balanced in its look at this question, while still delivering a great plot.”

Wife’s Grade and Comment: A “It was a good combination of new characters and development of a long-standing story thread, plus it was fun to get to know some more Cardassians.”

The Grand Nagus of the Ferengi shows up once again on DS9, but he’s spreading a message that is utterly baffling to Quark and the other Ferengi. He seems to have re-written the Rules of Acquisition into some kind of rules for being kind to others! What gives? As Quark struggles with the reality that the Nagus might really be losing it, they discover that the Nagus tried to meet up with the mysterious aliens in the Wormhole to exploit them for knowledge of the future–and more monetary gain. The aliens, however, sent him back with a message of compassion. Quark must rush with the help of others to save the Ferengi and the Nagus from certain financial destruction. They do so! Monetary gains all around!

Okay, this one was a bit silly, but so fun. I particularly loved the scene in which Quark has convinced himself the Nagus is making these changes as some kind of grand scheme that he can’t possibly comprehend, only to give in to the realization that the Nagus has truly gone off his rocker. It’s funny and delightful.

This kind of lighthearted, silly episode is something that I think DS9 pulls off much better than TNG. TNG takes itself very seriously throughout–often too seriously–so the silly episodes have to be quite excellent to succeed. DS9 just is quite serious–wars and rumors of wars abound, serious topics are constantly explored, etc. Because of this, the silly episodes like this one feel like a kind of breather to give some recovery after serious episodes. I enjoyed this one quite a bit, and love every time the Grand Nagus shows up.

Grade: B “Radically implausible and silly, but insanely fun to watch nonetheless.”

Wife’s Grade and Comment: B “It was fun. It was also very silly.”

Star Trek: DS9– For more episode reviews, follow this site and also click this link to read more (scroll down as needed)! Drop me a comment to let me know what you thought!