The Self-Published Science Fiction Contest is well underway, and I’m bringing you reviews as I finish books.

There will be some minor spoilers in my reviews.

Wherever Seeds May Fall by Peter Cawdron

There’s an object in space, but it’s behaving in a way suggests more than it just being an asteroid. As the evidence becomes more and clear that there’s more than meets the eye, people on Earth race to do the math, figure out what’s happening, and manage the political consequences of whatever news they come up with.

It’s a pretty fantastic premise, though it’s been done before. What makes Cawdron’s work stand out is a combination of great characterization, contemporary issues, and adept use of science and action to keep the plot moving.

Cawdron introduces a number of very contemporary issues in the novel. One character is a full-on conspiracy theorist with a huge platform for spreading misinformation. But Cawdron gives even this character development, so that even what could turn into a caricature has more dimensions than may initially seem. Other characters get development throughout the book, but largely are there to help push the plot along. That said, they all have clear personalities and are well-written.

There’s science in this book–and as far as I can tell as a lay person, it’s pretty accurate. There are even a few illustrations throughout the novel showing how the object might be impacted by various bodies in our solar system. I’m a huge fan of hard sci-fi, and so I ate this all up. It’s quite well done.

Wherever Seeds May Fall was the first book I started reading for the SPSFC and I gotta say that for me it’s a frontrunner to win the contest. Have you read it, and if so, what do you think?

All Links to Amazon are Affiliates 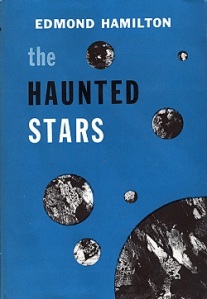 The Haunted Stars by Edmond Hamilton

I have never read Edmond Hamilton before, but he was a well-known pulp author in his own time. He wrote for DC comics, started Captain Future, and scattered his pulpy sci-fi across fandom. He was also married to Leigh Brackett, whose work I have enjoyed (as you probably have, since she co-wrote the screenplay for The Empire Strikes Back). Anyway, I saw someone recommend The Haunted Stars during Vintage Sci-Fi Month, saying that fans of Star Trek would probably like it. I’m a fan of Star Trek, and the cover’s simplicity had a weird innate appeal to me, so I grabbed it.

The Haunted Stars initially seems somewhat like a red scare novel, but its main character, Robert Fairlie, is a linguist, which was not an established trope at this point. The United States has apparently discovered an ancient military base on the moon, and has called a team of scientists in to decode what they found there. One character pushes for an expedition after they figure out how to make an Ion drive and also discover that the people who made this base are, in fact, the ancestors of all of humanity. They go to Ryn, the planet of the Vanryn, those ancestors of humanity. When they arrive, they meet a cool reception from most because they announce they want to find additional weapons/technology. The Vanryn, apparently, live in millennia-old fear of the Llorn, who defeated the Vanryn and scourged them from the galaxy 30,000 years ago.

All of that plot occupies about 85% of the book, and at this point it is a pretty excellent sci-fi adventure novel with some hard sci-fi mixed in. Really, it has most of my favorite sci-fi features: ancient ruins found by humans, some linguistics mixed in, some real (pseudo-) science peppering the plot. It had its flaws at this point–like women being at best tertiary characters, but it stood up as a solid novel. But it didn’t feel like Star Trek in any way whatsoever, and I wondered why it was recommended to fans of that franchise. Then the ending happened.

That last 15% or so of the book is the real deal. The Llorn show up, which wasn’t a surprise given how heavily foreshadowed the idea was, but they have news. It turns out that the Llorn were not the aggressor in the war with the Vanryn, but rather they fought only to prevent the Vanryn from wiping out all life throughout the galaxy. The Vanryn were simply seeding all planets and taking them for themselves, wiping out indigenous populations or stages of life that had yet to evolve intelligence. The Llorn, by contrast, work to simply allow life to exist in its many-faceted wonder, hoping to improve the universe through the uplift of many different intelligent species bringing their own cultures and assumptions to the galactic table. The Llorn tell the humans they will not interfere again, should they (the humans who are Vanryn) decide to spread across the universe again, but they show them a premonition of the endless war and destruction that will follow that course of action. Fairlie and the other scientists are left to bring the message back to Earth, unsure of how humanity will take it.

I adored that ending. It reminded me quite a bit of a kind of inverse of The Dark Forest by Cixin Liu (one of my all-time favorite science fiction novels). Will humanity heed the warning? Will the Red Scare doom them all to bitterness and war? Will ambition, pride, and hate overcome a possibility to thrive throughout time? We don’t know! Hamilton doesn’t tell us. It’s a somewhat shocking offering in what seemed to be a simple pulp sci-fi classic that makes you as a reader think and reflect on what it means to be human. I love it so much.

The Haunted Stars is well-worth your time as a lover of science fiction. It has some flaws, but overall it is excellent reading. It’s pulp sci-fi with much more thoughtfulness than one might expect, and an ending that is just spot-on. I recommend it especially if you also like those tropes I mentioned- space archaeology, linguistics, and hard sci-fi mixed in.