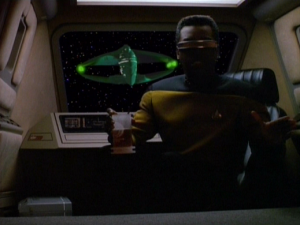 Geordi La Forge is heading to a vacation and seminar when his shuttle is intercepted by Romulans and he is captured. They brainwash him and program him to perform whatever tasks they want. Meanwhile, a Klingon planet is experiencing a rebellion and it is suspected that the Federation is aiding the rebels. The Enterprise is dispatched with a Klingon ambassador to investigate. Much evidence points to the Federation being involved, and Geordi’s mind control also leads him to send more evidence, but the timeline is forced forward as the non-brain-controlled Geordi and crew push the investigation. Geordi is ordered to kill the Klingon governor, but some quick thinking by Data saves the day.

I was blown away by this episode from the great opening getting to see Geordi at leisure and then getting kidnapped all the way through the great ending.

There are two primary things that make this a superb episode (namely, a Geordi-centric episode that uses the strength of his character and a very strong main plot), but it also gets all the details right. Those details include the ongoing investigation Data is doing into the strange emissions which makes his detective work at the end of the episode out to be part of that rather than a kind of deus ex machina ending, great use of secondary characters, continuity with the broader plot happening throughout the conflict with the Romulans, and good music.

The plot itself is excellent, as it both ties in with the storyline of the Romulan-Klingon-Federation timeline and helps expose the notion that the Federation-Klingon alliance is not exactly airtight. There is real tension here as viewers wonder whether another step towards alienation between the two governments might be taken. The focus on Geordi is a smart move as his character is quite lovable but also rarely gets treatment apart from a string of failed love interests.

I also need to comment on the ending. This is how you end an episode! The closing scene opens with a close-up of Geordi adamantly arguing with Deanna Troi: “But I remember!” as he points to his head. After he describes some of his memories, Troi takes him back to the shuttle and leads him into it by saying “The first thing you did when you saw the Romulan ship was…” [I paraphrased here] and he just completes the sentence, then realizes this conflicts with his other “memories.” It’s a revelatory moment for him and one which just ties the episode off with just enough closure and ambiguity to get viewers’ minds racing. It is also a great moment for Troi, as she demonstrates her capacity as counselor in the most convincing way yet.

“The Mind’s Eye” is just a phenomenal episode and one that deserves a place among the all-time greats.

Wife’s Grade and Comment: A “It had a great premise and an excellent character-driven plot.”

The Enterprise explores a Nebula which leads to some strange occurrences with dark matter. Meanwhile, Data and another officer, Jenna D’Sora enter into a relationship after D’Sora comes to realize that Data is “perfect” due to his thoughtfulness and kindness (and Data’s questioning the crew about whether it might be a good idea). As the strange occurrences increase, the Enterprise is caught in a struggle to escape–led out of the Nebula by Picard in a shuttle. D’Sora ultimately realizes that Data’s lack of emotions is a greater rift to cross than she realized. They break up, but the ship is safe.

Here’s a strong episode that doesn’t quite do enough. The main plot about the Nebula is mostly a backdrop for the drama between Data and D’Sora. It’s a nice touch to have the two of them working on the Nebula so that it doesn’t seem totally like two episodes thrown together, but the relationship is the star of the episode.

Data’s interactions with D’Sora are suitably hilarious, with his comments ranging from unintentionally insightful to blatant howlers. It’s a great way to explore Data’s character on the level of human relationships, even if it is just a bit hard to believe that D’Sora would think such a relationship could work. My wife and I both laughed quite a bit in this one, and it is a pretty fun episode.

The best part about the episode, though, is the ending, which turns the episode on its head from being a kind of lighthearted romp into a serious look at Data’s continued struggles. Data’s response to the breakup is just to query whether the relationship is over and then say that he will delete the relevant file. After D’Sora leaves, Data holds spot and calmly pets him while he blows out the candle. It’s a totally bleak ending that shows just how much work Data has to do yet to realize his goal of becoming “human” in a more relevant sense. His lack of emotions means that on a fundamental level he cannot connect to (or even genuinely care about) humans, and–in an almost dark twist–doesn’t even register the problem that this is.

Fun side note: this was apparently the first episode directed by Patrick Stewart (Picard).

Grade: B+ “An intriguing look at Data’s ‘humanity’ with a suitably bleak ending.”

Wife’s Grade and Comment: A- “The two plot issues were both interesting but didn’t work together.”