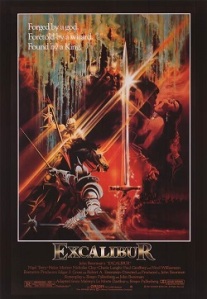 I’m not sure if you can get more 80s epic than this onto a single poster.

I have embarked on a quest to watch a number of 80s Fantasy flicks and share my findings with you, dear readers. Here, I review “Excalibur,” the tale of King Arthur. This is another one I hadn’t seen before, so my reflections are from that perspective. There will be SPOILERS in what follows.

“Excalibur” is really hard for me to judge. At times a grand epic with awesome fights, grand scenes, and epic stories, it threatened to sweep me away in its glories. Unfortunately, at other times it is weird, grotesque, and confusing to the extent that it made me want to skip scenes entirely.

I think the biggest problem with the film is that it bites off more than it can chew. It throws so much of Arthur’s story at viewers that it sometimes feels like a lesson in legend, but it does so in a fashion that fails to grasp several of the moments that it wants to be epic. Much of the story seems unexplained to the point that it is just assumed that you as the viewer know what’s happening, and that you must think it is epic. I admit only a passing familiarity with the story of King Arthur, but this movie made me feel like a complete novice. There’s a lot there, and the scope of it is pretty cool at times, but that same scope is daunting.

Another huge flaw is the weirdness of the move in parts. Unneeded nudity is scattered throughout (and has its own weirdness, like one sex scene that has Bambi featured on screen [not actually Bambi]), and some really gross moments happen (like seeing ravens picking at the flesh of dead men hanging from trees).The music isn’t great, apart from some pretty awesome insertions of O Fortuna into the flick, such as the final battle. The scenery also didn’t seem like it was utilized as well as it could have been.

On the other hand, the fighting scenes are pretty exciting, with numerous notable and exciting battles on horseback and off. The story is pretty epic, despite being really hard to follow throughout. Enemies rise and fall, and the theme throughout seems to be of a dream that humanity cannot quite grasp–spoken to by Merlin–that human hearts contain the potential for great evil that is all-too-often exercised so needlessly. The ending is pretty epic as well.

So yeah, this is gonna be a really tough movie to grade. You know that thing that teachers do in which they can’t decide what grade to give you so they give you A-/B+? I’m about to do that to the nth degree.

+Progressively gets more epic
+Arthur’s accent is sweet
+Cool round table
+Patrick Stewart is in this
+Really cool plot, if a bit too much

A really epic and really not epic story of King Arthur. I’d watch it again, but only with the ability to skip through about 35% of the movie.