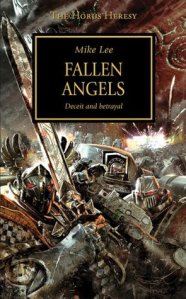 I know I’m late to the party, but I finally decided to start reading the “Horus Heresy,” a huge series of novels set in the universe of Warhammer 40,000 (though it is set much earlier than the year 40,000). I thought it would be awesome to blog the series as I go. With more than 50 novels and many, many short stories, there will be a lot of posts in this series (I doubt I’ll get to all the short stories). I’m reading the series in publication order unless otherwise noted. There will be SPOILERS from the books discussed as well as previous books in the series. Please DO NOT SPOIL later books in the series.

I found Fallen Angels to be a bit difficult to really get into. Part of that might be my own life circumstances, dealing with personal loss, but I also think the book is just kind of slow. That statement is surprising, given that there is a bit of action here, but what I mean is it feels like all the action is little more than a WWI kind of slogfest where nothing really gets resolved despite 400 pages of reading.

I guess I’m in the minority on this one, because looking through reviews by others, it seems everyone liked the scenes on Caliban more than those scenes on Diamat. But Diamat seemed to actually have resolution. Lion El’Jonson is somewhat one dimensional, but he at least knows what he wants, which seems to be greater power and influence. The fighting on Diamat is intense, and seems much more goal-oriented than the action on Caliban, which is shrouded in mystery and betrayal. I’m starting to think my expectations for the Horus Heresy might just be wrong, to be honest. Time and again, we’re offered perspectives of those outside the Space Marines as main perspectives that give us the ‘normal’ person’s view of events. Time and again, the central plot is much more about political intrigue than about action. My expectations were much more about having a ton of huge battles and betrayals, etc. Those happen, but not on the scale or at the rate I thought they would. Perhaps later books have more. Perhaps my tastes for Warhammer fiction are too simple, though I got into the universe through Eisenhorn. I’ll try to adjust expectations going forward.

The cover of this one is pretty awesome. I think some of the action does approach the level I enjoy, again, mostly on Diamat. The ambiguity of the endings of both plot threads–Lion basically handing Titans over to the traitors and the rise of some dark power on Caliban–makes it a good ending. And that’s something basically every book has had so far–some twist at the end that really makes the whole book worth getting through, even if it was not your favorite. But for now, what I feel is another book where the payoff is yet to come. In a series as long as the Horus Heresy, that makes it hard, because so many books have middle book syndrome.

Fallen Angels is an okay installment in the Horus Heresy. I liked the history of the Dark Angels being revealed more deeply, but I felt like the payoff wasn’t all there.

Horus Heresy and Warhammer/40K Hub– All my posts on the Horus Heresy, as well as books throughout the Warhammer and 40K universe can be found here.