As a planet is nearing destruction, Q shows up on board the Enterprise claiming to have been stripped of powers and title. The crew struggles to believe him as the destruction of the planet grows more imminent. When aliens try to take vengeance on Q, the crew realizes he may be serious. Q decides to leave the ship to prevent more bloodshed and because of this selfless act is reinstated in the Q Continuum. He then saves the local planet from destruction and even thanks the crew.

I gotta say it: I’m stunned that I enjoyed this episode. I remember not hating it when I saw it long ago, but I really don’t like Q. He’s annoying, the episodes he is in tend to purely be for the sake of deus ex machina without any relevance, he’s annoying, his episodes tend to be features on him rather than on individual crew members… and did I mention he’s annoying? But seriously, “Deja Q” is a solid episode. It expands on the wealth of annoyance I have as a viewer with Q alongside the crew’s annoyance with his previous absurdities in order to make him a relatable character. By making him become not only human, but also a (deserved?) target, even for the length of an episode, we find Q is vulnerable and frankly even terrified at the prospect of being in the same position he has placed others in.

It’s endearing, and surprisingly so. The episode made a character whose main feature has been to be utterly irksome and played turnabout, making him actually a bit likable.

The plot of the planet struggling is mostly just filler, but it provides a nice bookend to the whole adventure as the crew of the  Enterprise realizes they can’t really prevent the tragedy, while Q simply solves it immediately for them. It’s a deus ex machina which, for once, does not feel utterly contrived.

Grade: Surprisingly, A- “A ‘Q’ episode that’s not only not terrible, but quite endearing while also making him relatable? Incredible.”

Wife’s Grade and Comment: A- “It was entertaining all-around though occasionally I wondered if they’d tried to squeeze too much plot in.”

“A Matter of Perspective”

Riker is put on trial after he is accused of murdering Dr. Apgar, a scientist on a space station he was visiting, due to a dispute over Mrs. Apgar’s coming-on to Riker. The trial takes place on the holodeck and testimony varies wildly as the story unfolds. It doesn’t look good for Riker, though, as the energy burst that blew the station came from where he beamed out. Ultimately, it turns out that Dr. Apgar was in fact trying to kill Riker, but the plan backfired and he killed himself.

TNG seems to fairly frequently have these “trial” episodes where a court is convened and usually something big is at stake. Sometimes it works spectacularly (“The Measure of a Man”); sometimes, not so much (“Encounter at Farpoint”). Here, it works really well. The difficulty with a series like TNG is that whenever a main character is in peril, you can be pretty darned sure they’re going to come out alright. Like Superman, it seems that sometimes the only way to injure them is through emotional trauma. Although “A Matter of Perspective” doesn’t fully capitalize on how traumatic this whole experience would have to be for Riker, not to mention various people who worked with him, when he is exonerated, there is genuine relief.

The episode has its problems, for sure. There are some pretty major plot holes in trying to figure out exactly what happened (though some of these are surely intentional), there are some major inconsistencies in how TNG handles transporting, and the ending does seem just a bit too convenient. The score for this one is really hard, and I’m going a bit against my better judgment. This is a deeply flawed episode, but I just enjoyed it too dang much to let that drag it down for me. I enjoyed it too much to go lower.

Wife’s Grade and Comment: B- “It was interesting but the flashback series got a little bit long.” 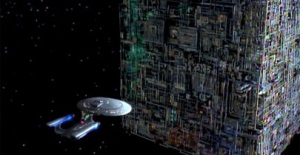 At last we reveal ourselves to the Enterprise; at last, we shall have revenge.

I’m going through “Star Trek: The Next Generation” and reviewing every episode, complete with commentary and a grade from A-F. Here, we’re in season 2 and discussing episodes fifteen and sixteen. I’ve also included a score and comment from my wife, who has never seen the show before. There are SPOILERS for each episode below.

Wesley is put in charge of a team for a geological survey of a planet in order to continue his development towards officer training. Meanwhile, Data receives a transmission asking “Is anyone out there?” and decides to answer it by saying “Yes.” It turns out the transmission is from a young girl whose planet is experiencing geological upheaval. Data wants to fix it, but this would violate the prime directive. Ultimately, Wesley’s team figures out a way to stop the upheaval while Data saves his interstellar pen pal, after which her memory is erased.

Wesley’s struggles with his first command of a team were actually pretty compelling. It was delivered in a winsome way while also cashing in on the premise. Watching him in a command situation while also trying to figure out the nuances of the situation was well-done and even well-acted.

The discussion over the Prime Directive between the senior officers was interesting, and the juxtaposition between Worf’s absolutism and Pulaski’s willingness to bend it was great. The ensuing debate over fate and the plight of a world was great, bringing forward philosophical ethical issues. Picard’s reasoning about moral certitude was catching, and Data’s insight into the issue not being a philosophical debate was well-placed.

The episode raises these questions alongside the debate over wiping the memory of the alien girl. Pulaski comforts Data by pointing out they need to wipe the girl’s memory to allow her to stay on whatever path she was born into, but one wonders whether perhaps her path would be to discover that there is life “out there” among the stars. Similar questions about fate were raised with the previous discussion on the Prime Directive, and TNG often tries to answer the questions. Here, we’re basically just served a number of questions without a proposed solution. It’s frustrating and charming all at once, and it calls for reflection afterwards as well.

Despite all these great aspects, there really was quite a bit of need for “suspension of disbelief” throughout this episode above and beyond the standard fare. Why didn’t Data immediately report this contact with alien life to Picard or a superior? Why does O’Brien unquestioningly transport Data and this alien to the Enterprise? Wouldn’t there be some kind of discipline for flaunting the Prime Directive so eagerly? Since when did they have the technology to wipe out memories, and how easily could they solve other Prime Directive issues with it? (Or apply it to crazy amounts of criminal activity?) How does a planet’s geological upheaval get fixed within seconds? The questions just keep coming, and the episode almost gleefully flaunts these issues without offering any explanation. They keep “Pen Pals” from being the great episode it could be.

Grade: B “Any episode that stars Wesley and isn’t terrible is refreshing. The stretching of imagination, however, got painful.”

Wife’s Grade and Comment: C+ “It was nice to see Wes grow in his character, but the plot was very hard to believe.”

Q shows up and is petulant because Picard won’t make him a crew member so he shoots the Enterprise off to meet the Borg. The Enterprise is worse for the wear after the engagement and Picard appeals to Q to get them back home. He does, the end. Oh, and Guinan is apparently hundreds (or thousands… or millions… or !?) of years old and has some history with Q somehow. Oh, and there’s a new engineering Ensign named Sonya who’s overeager and a klutz.

If my summary seems a little chaotic that’s because I was trying to reflect the episode: it has a lot going on and seems a bit thrown together. We never get any reason behind Sonya’s introduction and she seems tacked on. The encounter with the Borg has much drama, but Q was there to deus ex machina the whole thing. It was cool to have the episode point ahead: “Look out for what’s coming!” but hard to follow that theme alongside weird revelations about Guinan. Lots of questions were raised, and no answers provided. That’s not necessarily a bad thing, but it also leaves me scratching my head. What was the point of this episode? It’s like an episode-long version of “What’s next on TNG.”

That said, the Borg are awesome. The creators did an awesome job introducing a truly sinister threat, but doing so in a way that isn’t over-the-top. There’s no question that the Borg are a major threat, but there’s also no question that they aren’t sporting devil horns and worshiping Satan; that is, they’re not evil for evil’s sake. There’s a mystery to them that makes the episode more appealing and wins me over despite its total lack of cohesion.

If the episode had simply stayed about the Borg and Q trying to show Picard they need to prepare even more, it would have had more cohesion. As it stands, it’s got too much going on to be a truly great episode.

Grade: B- “Introducing the Borg was genius, but it could have been done without so many distractions.”

Wife’s Grade and Comment: B+ “It was very interesting but the Q manipulation felt artificial… and annoying.”