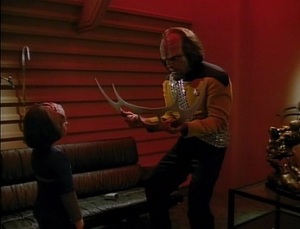 Worf’s father-son training culminates in: “This is how you cut some fools!”

A Federation vessel sends a distress call from Turkana IV, birthplace of Tasha Yar. The Enterprise goes to investigate, discovering the crew has been captured by a faction on the planet. When an away team beams down, they further discover that Tasha Yar had a sister, Ishara, who is deeply entrenched in one of the factions. Picard and crew–particularly Data, interact with Ishara throughout the episode, learning more about her and Tasha (and finding many parallels) in the process. They also plan a rescue of the captured Federation personnel. After taking out a tracking device in Ishara used by the factions to keep balance, Ishara uses the rescue mission to try to bring down the security system of the rival faction. She is discovered by Data, whom she threatens to kill before he manages to stun her and halt disabling of the system. Ishara is beamed back to Turkana IV after a brief discussion with various crew members.

Whew that was a long summary. The episode has a lot going on, but to the writer’s credit, it never feels disjointed or too convoluted. You knew you were going to run into something related to Tasha when the planet was announced, but to find a sister was an interesting twist. Moreover, the best part of the episode was seeing how Ishara manipulated the crew, who had the best intentions but each projected their own desires onto Ishara. It serves up a great commentary on human nature and the way we often do try to see things the way we want them to be rather than as the way they are.

Data’s parting line to Ishara is epic. After a heartfelt mini-speech from her about how she felt Data could be a friend, he just says “Energize.” Data has no time for betrayal! His brief conversation with Riker afterwards adds to the interest of his character in the episode.

Grade: B+ “It’s pretty amazing that the series can make an episode about a character who’s been gone for three seasons without her even being in it and make it good!”

Wife’s Grade and Comment: B+ “It was a neat way to get some backstory for Lieutenant Yar.”

The Enterprise is approached by a Klingon warship with Ambassador K’Ehleyr–Worf’s earlier fling–aboard. Turns out Worf has a kid! The Klingon Chancellor is dying and has selected Picard to determine who will be the next Chancellor because he fears betrayal in the Empire. Gowron–a seemingly shady Klingon willing to bribe/threaten–and Duros–the one whose family betrayed the Empire and Worf took the fall for in “Sins of the Father” are contending for the title. Picard arbitrates the meeting as an investigation into various acts continue and Worf becomes familiar with his son while also

“Reunion” was another episode that had a ton of plot points happening. Many more are summarized here.

K’Ehleyr’s line to Gowron- “You talk like a Ferengi!” Oh my goodness that was an epic line.

But the epic lines weren’t all that went right in this episode. The entire plot was phenomenal, as we got to experience more of Klingon culture with the right to lead the Klingon High Council up for grabs. Worf hunting down Duros after he assassinates K’Ehleyr and fighting him to the death is a fitting end for the traitor. It was also surprising becuase I definitely thought that someone would stop him in the act. Having Picard issue an official reprimand was totally in character as well.

The addition of Alexander–Worf’s son–to the cast, I know, has implications later, but for now it was a unique device that ties Worf more intricately into a broader storyline of his own development riding the line between civilizations. I would also be remiss not to mention the introduction of the Bat’leth–the Klingon weapon (seen in picture)–and the cultural background of the Klingon Empire added into this episode. It’s just awesome.

So much happens in this episode that is awesome. It’s hard to even try to list everything. There is also enough ambiguity to keep viewers absolutely enthralled waiting for the next plot entry. Sure, Duros is dead, but what will happen with the Klingon Empire now that it is lead by someone willing to resort to bribery (and who really did work with the Romulans)?

Grade: A+ “An epic episode with great acting, a sweet plot, and some truly amazing moments.”

Wife’s Grade and Comment: A “The whole story was compelling and the acting was great.”