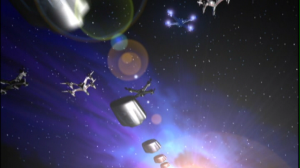 I am very late to the Babylon 5 party. As it came out, I was a bit young for the show and the few times we tried to watch as a family, it was clear we had no idea what was going on. After several people bugged me, telling me it was the show I needed to watch, I grabbed the whole series around Christmas last year on a great sale. I’ve been watching it since, sneaking it in between the many things going on in my life. It quickly became apparent that I’d want to discuss the episodes with others, so I began this series of posts. Please don’t spoil anything from later seasons or episodes for me!

9: Point of No Return
A huge amount of plot happens in this episode. Reflecting on it after the fact, I am honestly surprised this much fit into approximately 42-44 minutes. Yet, as has happened consistently so far, at no point did the plot feel horribly rushed or bloated. It worked extremely well. Anyway, to the episode. First, we have Mollari editing what Vir is saying about his visit to the Minbari. I loved this little portrait scene, because it shows the contrast in their characters quite well. Then, we get the Night Watch is being authorized to take over Babylon 5. I know that “this is like the Nazis” gets thrown around a lot, but this is actually extremely similar to how the Nazis took over Germany, utilizing tragedies and misinformation to continue to seize more and more power. I’m sure this is intentional, as well. I read quite a bit of history of WW2 due to a deep interest in the German theologian Dietrich Bonhoeffer who was executed at Hitler’s specific orders. I couldn’t help but see many parallels here, and the closeness of the ties suggests at least some research went in to paralleling some aspects of the rise of the Nazis. It’s a fascinating, sci-fi portrayal of how power can go wrong so quickly.

Can we pause for a moment and think about the number of people from Star Trek on this show? We’ve got Bester, played by Walter Koenig. It was a bit jarring to be like: “Hey, is that Chekov?” when he first showed up, but he nails his role here so far. Now, we have Lady Morella, some kind of Centauri Prophet, who is Lwaxana Troi–Majel Barrett. Side note: as a kid, I could not stand Lwaxana Troi, but when I re-watched TNG/DS9 in order as an adult she grew on me. Majel Barrett had more dimension acting than I picked up as a kid, and she shows it here. Side note 2, I love that Bester is Afred Bester and is clearly named after the science fiction author of the same name and spelling. I haven’t read a ton of Bester (I think The Demolished Man might be the only book I’ve read of his, but I want to read more now.

Anyway, I adored the part of this episode where Girabaldi absolutely lost it on the Night Watch, literally flipping tables and getting arrested. It’s a great scene that’s absolutely on point for his character, and the actor they chose has grown on me with scenes like this. G’Kar’s realization that working with the humans seemed like a major point, but we already get the payoff in this episode as the Narn are brought in to combat the Night Watch. Zack Allan hits a turning point in this episode, and I loved that he went with the good guys. I also liked how much ambiguity there was until we finally saw which side he picked. I hope he continues to get developed. I’m not a huge fan of him, but I think there’s room for dynamic growth.

Morella reveals some kind of prophecy that Mollari will be Emperor, but that Vir will also be Emperor once Mollari dies. I’m not sure how to take this because so far prophetic type things have been basic certainties on the show. But Vir? Really? We’ll see.

Anyway, ultimately the good guys take the station back after some early morning antics trapping the Night Watch, but this will surely have broader implications for Earth-B5 relations. This episode has way more in it, but I think I hit the major points I wanted to discuss. I loved this one. Heck, I love them all, but this one was particularly great.

10: Severed Dreams
The opener for this one has Mollari complaining loudly about the Narn as security and then having to wait hours because of a “technical difficulty” due to the “inefficient” Narn. I loved it. Good humor, and continues to show Mollari as a jerk. I truly hope he gets a redemptive arc of some sort, because I adored him in season 1. Some Minbari person brings a bunch more info about how the Shadows are making war happen far away. I’m sure that will become important probably but for now it seemed  a sidenote because EARTH FORCE IS BOMBING MARS! Yeah, so I guess I did not anticipate at all the huge amount of political intrigue this show would have. Early on in the show when Earth was mentioned I kind of just wrote it off as background noise, but now we see how important that was. It’s great to see the development here, and the rumblings we’ve seen made it so it wasn’t totally suspension of disbelief-defying. Also, the interrupted news broadcast was a great way to do this as a reveal. Time and again the right choices were made by whoever was running the show to make it dramatic and impactful.

Okay, so now we already have Earth Force showing up to challenge Babylon 5 with some rebellious ships assisting B5, and this battle scene was totally awesome. There’s a huge contrast in special effects with similar shows at the time, with the obvious comparison being Star Trek Deep Space Nine (which I love). These haven’t dated super great, but the excitement is all still there, and this was a fantastic, dramatic, huge epic space battle, which we almost never get to see in cinema or TV. Huge kudos for this great scene.

Oh yeah, and the Minbari show up to save the day. No biggy. I’m sure that won’t be important (he says sarcastically). Loved it.

11: Ceremonies of Light and Dark
Deporting Night Watch! *Metal music plays in background because this scene is totally awesome.*

We have some assassination attempts, some kidnapping, and some intrigue for the main plot as Delenn gets captured. Lennier and Delenn have an interesting conversation about prophecy given my thoughts on prophecy with Vir above. We’ll see how this all plays out. Mollari has a good line in this episode too, as he plays with Centauri politics: “Why should I listen to you?” asks Refa. “Because I have poisoned your drink!” says Mollari. Loved this moment. I want to see Mollari develop more, and this may be the start of something for him.

Night Watch people who stayed behind have kidnapped Delenn and it is time to UNLEASH MARCUS, possibly my new favorite character. I basically love everything about him, especially his accent. No, but seriously, he delivers one of the best one-liners in the show so far: “They [the Minbari who trained Marcus] said I was carrying around a lot of repressed anger.”
“And?” asks Lennier.
Raising hands to scene of violence, Marcus says, “I’m not repressed any more.”
It’s a laugh out loud moment for me, but it shows some possibility for more background on Marcus as well. I hope he stays around the rest of the series, because he’s awesome in every way. Anyway, they rescue Delenn. New uniforms for the crew. Marcus/10.

12: Sic Transit Vir
In which we discover Vir is a great human being… well, a great person, anyway. So in his travels, he’s been apparently diverting Narn who were going to be killed through forced labor in order to save them by hiding them as “dead.” This was revealed as Mollari was in the process of praising him for mass murder. Is Mollari truly this despicable, or is he playing a long game? Time will tell! Mollari also set up an arranged marriage for Vir to Drusella, who is… something else. She fights a Narn and ties him up for Vir to kill at one point. I wonder how her character is going to shape Vir. Overall, this episode seemed like a drawn out way to give Vir a plot arc. It was okay, but it dragged at points.