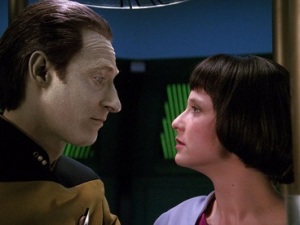 I can see the family resemblance.

We’ve now finished watching all of season 3 of TNG and offered individual reviews of every episode. How about taking some looks at the best and worst parts of the season! Feel free to chime in to let us know what you thought. There are SPOILERS for Season 3 in what follows.

J.W.: Alright let’s just admit that Lwaxana Troi (“Menage a Troi“) can take this category any season in which she appears. Instead, I’m going to pick Devinoni Ral from “The Price.” The episode itself was decent, but Ral’s hyper-seduction and assault of Troi (touching without permission, etc.) and overbearing insults toward Riker made it almost unbearable to watch at points.

Beth: DaiMon Tog from “Menage a Troi“- he was just really annoying. [J.W. note- can I point out that this episode gets a lot of hate from us in this awards ceremony?]

J.W.: Sarek from “Sarek.” Watching a Vulcan suffer breakdowns related to emotions was moving, and Sarek played the part perfectly. It’s also a great tie in to earlier Trek lore.

Beth: Sarek is the best guest character. He’s got the most interesting dilemma and the characters around him added interest.

J.W.: Let’s give credit where it is due: Picard rocked this season. Whether it was as an archaeologist on an adventure in “Captain’s Holiday” or as the emotional outlet for Sarek in the oh-so-aptly named “Sarek,” Picard showed versatility and genuine development as a character. Plus, I don’t think anyone will forget Picard’s final words on “Best of Both Worlds Part I“- “I am Lucutus of Borg.”

Beth: Geordi La Forge between the two episodes he was prominently featured in, his character was developed and his acting talent shown.

J.W.: The Klingon assembly turning away from Worf in “Sins of the Father.” You may have thought the episode might end badly for Worf, but I don’t think anyone could have predicted the utter shame he was wrongfully subjected to. It seems like an awesome set up for later plot development.

Beth: “I am Locutus of Borg” from “Best of Both Worlds Part I”- it was so epic!

Most “Huh?” or Awful/Worst Moment

J.W.: In “Who Watches the Watchers” we’re taken on an ahistorical ride through the evolution of religions school. It’s rather pointless and also inaccurate.

Beth: The Lwaxana and DaiMon Tog interactions from “Menage a Troi.”

J.W.: Easily “Menage a Troi.” Absolutely nothing went right in this episode, and it was just a terrible sight to behold. It might be the worst episode in the series so far (and hopefully overall), though “The Child” gives it a run for its money (as does “Shades of Gray” but that gets a Mulligan). Watching Lwaxana Troi is always a way to spoil an episode, and the plot was just absurd. Approximately 20 seconds of this episode was bearable.

Beth: “Captain’s Holiday” just didn’t interest me that much. It seemed out of place in the season. [J.W.’s note- I almost picked this one for best episode! I loved it!]

J.W.: I had to sit and think this one over for a while, but I’m going to go with “Sins of the Father.” Season 3 was filled with epic moments and persistent storylines, but here we have something that catapults Worf’s family into the limelight in spectacular fashion and sets up what will hopefully be more thrills in the Klingon part of the galaxy.

Beth: “Best of Both Worlds Part I” kept you on the edge of your seat and featured some great acting.

J.W.: I think this season is just fantastic. Sure, there are bumps along the way but it is consistently good television. I give it an A- overall. There’s still room for improvement, but I was very satisfied with this season.

Beth: B+ Despite a few not-so-great episodes the overall quality of the season.

Star Trek: The Next Generation Season 2 Awards– Swing on by to take a look at the awards for Season 2. What do you think of the selections?

Nothing like good ol’-fashioned a shaming ceremony to brighten a day.

“Sins of the Father”

Worf’s father is accused of treason, and his heretofore unknown brother comes to ask Worf to defend against this charge. Unfortunately, it turns out the whole thing is a political move as a prominent family was really the one guilty of treason, but Worf’s family is smaller and the Klingon hierarchy thought he wouldn’t care. The secret is discovered, but Worf agrees to suffer the dishonor of shunning in order to both allow for the political out and give himself time to discover a way to bring the truth to light.

There is an enormous amount of development which happens in a small space in this episode, but it balances everything so well that it just adds to the greatness of viewing it. Unfortunately, it does mean my plot summary above is inadequate. There are many scenes I simply skipped entirely, and many of these directly impact the story. It’s a testament to how great this episode is that it feels like we as viewers have suddenly been exposed to how enormous the universe really is and how different things are happening beyond the Enterprise.

I just want to highlight some awesome points for the sake of keeping this readable. The exposure to more of Klingon culture is done in a believable fashion, as we discover more major cultural differences between the Federation and the Klingon Empire. By exploring these issues directly through Worf and Picard, the episode is able to make it more intense while also grounding it in familiar enough territory that we never feel lost. The mystery as the crew tries to track down what really happened on Khitomer is balanced well with Worf/Picard/Kurn’s own investigations on the surface. Making Picard Worf’s second is as believable as it is awesome, and it gives a sense of how Worf has been integrated into the crew of the Enterprise.

The large variety of sets and the exposure to the Klingon homeworld make the episode feel even larger than it is. By introducing us to a new center around which to operate, “Sins” both widens the galaxy and makes it seem less like random wanderings through disconnected places. Worf’s brother provides both comedy and added drama, particularly in the early part of the episode while he’s not yet revealed himself.

Finally, there’s the shocking ending. I don’t think anyone really expects Worf to take the fall when they first see this one, but to have Worf accept massive dishonor–when honor is clearly so important to him as a character–in order to bow his head to the needs of the time is just an ingenious move. It’s both believable and surprising. Here is where Worf really comes into his own, and it shows that TNG is fully capable of carrying episodes with characters other than the central ones. “Sins of the Father” is a reminder of why we watch television, with its intense drama, but it also serves a major reason to watch TNG specifically. It’s one of the all-time great episodes.

Grade: A+ “One of the all-time great episodes, with mystery, suspense, and an absolutely thrilling  and tantalizing conclusion.”

Wife’s Grade and Comment: B+ “There was good suspense, but some of the story didn’t make very much sense.”

Picard is kidnapped and put in a room with three other captives while he is replaced by a body double. His double runs around acting strangely while Picard tries to coordinate with the other captives to escape. Ultimately, it turns out that he is just part of an experiment by a more advanced species wanting to explore the concept of leadership. Picard and crew are able to convince the species what they did should not be repeated.

“Allegiance” has some great elements in it, but they never seem to come together. The biggest difficulty with this episode is that it doesn’t do enough with the drama it could have generated. Body-double-Picard is so clearly not Picard that the crew immediately notices it. All the intensity that could have been built up is thus drained because everyone, not just the viewer, knows something is up.

The hostages back in the inescapable room keep some of the drama going, and the greatly different characters give some interest, but again the mystery just doesn’t seem to be there.

It’s not a terrible episode, and it the premise is really interesting. After all, with all the godlike beings out there, at some point you’re going to run into some weird experiments with seemingly inexplicable goals. But the drama just doesn’t build like it needs to to keep viewers engaged.

Grade: C+ “It was too slow to keep me engaged with the interesting premise.”

Wife’s Grade and Comment: B+ “It was an interesting premise and it was fun to see fake Picard ‘do his thing.'”