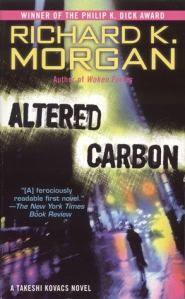 76. The Fifth Head of Cerberus by Gene Wolfe Grade: B-
“As I read this, I understood how beautiful it was, and how it could easily be among others’ favorites. I’m not sure if it’s just the mood I was in, or what, but I could not get into it. The style seemed much more interested in prose than in telling the story, and that made it difficult to get into. Of the three novellas included here, I enjoyed the third the most, with its tie-ins to the previous ones. I suspect on a re-read I might enjoy it more, so I should get back around to it someday.”

77. Out of the Silent Planet by C.S. Lewis Grade: B+
“Several parts of it seem dated–particularly the narration style, which draws heavily from H.G. Wells. Many good ideas are here, however, which make up for a somewhat disappointing lack of characterization given Lewis’ immense success at the same task in his Chronicles of Narnia. I enjoyed the different types of aliens, as well as the adventuresome plot. It’s a good, but not superb book.”

78. Ilium by Dan Simmons Grade: A
“A futuristic-ish reinvisioning of Homer’s epic with robots, insane technology, aliens, and more? Yeah, only Simmons could pull this off and not utterly destroy the source material. It’s not quite at the transcendent level of Hyperion, but it is simply phenomenal nonetheless. The different strands of the story get pulled together in surprising and satisfying ways, and it sets up for a sequel in a perfect fashion. I’m hoping the sequel will be just as good.”

79. The Three Stigmata of Palmer Eldritch by Philip K. Dick Grade: C-
“The later in Dick’s career I get on this list, the less I like his novels. Thankfully, he actually constructed an attempt at a story with characters for this one. The problem is that the characters and plot aren’t very compelling. It’s one of those books you finish and you think: ‘Well, that was okay, I guess.’ And really, that’s all this book was. Okay.”

80. Altered Carbon by Richard Morgan Grade: A
“It’s a sci-fi noir novel. Does there need to be any other reason to read it? Oh, yeah, and it’s a satisfying mystery, too. I forgot to mention that the science fiction aspects of it actually lend themselves to the mystery without feeling like they were invented merely to make the mystery easier to solve or make sense. It’s pretty fantastic. The reason I marked it down is because I think the sheer amount of explicit sex and extreme violence was overdone. Unlike many books, both make sense for the sake of the plot, but that doesn’t mean I have to enjoy reading them. Apart from those aspects, this novel was superb, and I think most readers would agree.”