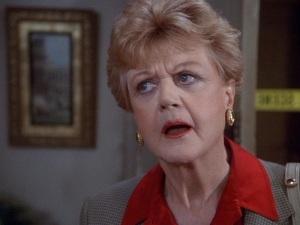 “Murder, She Wrote” is a simply phenomenal American television show  about a little old lady played by Angela Lansbury–JB Fletcher–who is probably your grandma and who, confound it, just has people get murdered everywhere she goes. She’s also a mystery writer, which totally makes her super legit at figuring out who done it. The series ran from 1984-1996. It’s just that good.

Aaron Hernandez was an NFL football star for the New England Patriots. Quickly rising to fame as one of the most dangerous Tight Ends (a skill position that blocks and catches passes designated as TE), he was given a 40$ million contract from the Patriots. Shortly thereafter, he was put on trial for the murder of Odin Lloyd. He was cut from the team before that–merely for having the charges brought against him.

Why in the world am I talking about a TE in the NFL in the 2010s and a TV show that stopped in 1996? Because there is a pretty epic connection: Lloyd’s murder was sealed, in part, by testimony of a kind that often pops up in episodes of “Murder, She Wrote.”

Jessica [JB] Fletcher flies in to Massachusetts to visit with some of her friends there who have partial ownership of a company that pays a lot of money to the Patriots. They’re cruising around the facility and they meet with some of the players, including Hernandez. Jessica is impressed by his kind attitude and queries him more about the sport, something she has little familiarity with.

“What is it you do for the Patriots, Aaron?” she asks, leaning over the door of the convertible to get a better look at the man.
“I’m a Tight End,” he replies, with a smile.
“Oh my!” ejects JB, “That’s a bit forward of you! Are all NFL players so blunt?” She says it with a wink and a smile, but is clearly a bit befuddled.
“I’m sorry,” says Aaron, grinning more broadly now, “it’s not a reference to my ‘assets,’–I am referring to a position on the field. I block for the quarterback and then run routes. I’ve caught a bunch of touchdowns, and will keep doing so in the future.” He ends with a wink at a pat on the shoulder for J.B., who is still seated in the top-down convertible.
Flustered but bemused, J.B. replies, “Oh! I’m sorry, I know so little about the sport. Horse racing, fencing, tennis, baseball, I know pretty well, but Football? There was one time I watched a few games, but some poor chap got murdered during the get-go and I never fully caught on.”
At the word “murder,” the camera zooms in on Hernandez’s face, showing it go dark for a moment. Fletcher, as always, takes note for later. After he waves, he hops in his own car, popping out his cell phone and appearing to have a rather angry conversation with someone. He sees Jessica watching and closes the door, rolling up its tinted window as a brief ominous cord of music sounds.

Skipping ahead a bit, a murder has occurred. Some young man who’d been seen around the Aaron Hernandez a bit had been shot six times! Scene: Patriots facility. Subjects: Jessica Fletcher, Aaron Hernandez, and Robert Kraft–the owner of the Patriots with whom J.B. and her friends had dinner with the previous evening. Kraft and Fletcher are walking together down the hall. Kraft spots Hernandez working out:

“J.B., mind if we stop in? I’d like to speak with Aaron for a moment, given all the news stories flying around,” Kraft asks.
“Of course!” Jessica follows Kraft into the weight room.
“Aaron, you’ve met Jessica, right?” queries Kraft.
“Yeah,” replies Hernandez, wiping his face with a towel and tossing it around his neck. “I’d shake hands but I’m a bit sweaty.”
“I understand,” says Jessica with a smile.
“Aaron, I’ll just get right to the point,” starts Kraft, “there’s a lot of talk in the news implicating you in the murder of that poor young man last night. I need to know right now, did you have anything to do with it?”
“I was not involved,” Hernandez says, meeting Kraft’s eyes, and then Jessica’s. “I am innocent. I really hope that the time of the murder comes out. I was at a club at the time it happened! Couldn’t have done it then, right?” He smiles.  [See ESPN for my source on these words in the conversation.]
Jessica’s eyes narrow, something is wrong with that statement, but she can’t quite put her finger on it.
“That’s all I needed to hear, Aaron, have a nice day!” Kraft nods to Hernandez, lightly touches Jessica’s arm, and they walk out together.
In the parking lot, as they get into the car for Kraft to give Jessica a ride back to her hotel, Jessica says “I’m sorry, but something just does not make sense. I just can’t put my finger on it.”

Later, the evidence seems strong enough that the police arrest Hernandez and the Patriots cut him from the team.

At the murder trial, both Kraft and Jessica are called to the stand in turn. Jessica has got it figured out now.
“What was it Hernandez said to you, Mrs. Fletcher?”
Jessica recounts the exact words of Hernandez, then: “But there was something wrong with that. I couldn’t place it until just now. The time of the murder was never disclosed. Indeed, even after much examination it seems the exact time of death either was never revealed or could not be pinpointed to the right time. But how did Hernandez know the time? I still don’t know the time. But he was convinced he knew the exact moment of the murder, and told as much, and where he allegedly was at the time of the murder. I’m sorry, but that doesn’t add up.”

Based on the testimony of Kraft and Fletcher, and on top of a mound of physical and other evidence, Hernandez is convicted and sentenced to life in prison without parole.

J.B. Fletcher and her friends are at a local restaurant, enjoying a plate of lobster.
“Looks like you sealed the case, Jessica!” one–Bob–says.
“Oh, I don’t know if it was me, Bob. It seems to me that in trying to claim his innocence, Hernandez just proved himself to be the guilty party. It’s a shame.”
“At least you got to eat some good lobster?”
“Indeed, though there’s no shortage of that in Maine!”
The episode ends with the whole group laughing, stopping on a shot of Jessica’s face lit up with a big smile.

I couldn’t resist writing this blog. It just is too perfect. The Hernandez case was–in part [and alongside what sounds like mounds of physical and circumstantial evidence]–was sealed just like an episode of “Murder, She Wrote.” If you liked the show, it might be worth looking into the case more. If you like awesome television, check out the TV series–it is fantastic. Hope you’ll drop a comment to let me know what you think, and follow my blog for more fun content.

The image in this post is not my property but I use it under fair use.

The preceding post is the property of J.W. Wartick (apart from quotations, which are the property of their respective owners, and works of art as credited; images are often freely available to the public and J.W. Wartick makes no claims of owning rights to the images unless he makes that explicit) and should not be reproduced in part or in whole without the expressed consent of the author. All content on this site is the property of J.W. Wartick and is made available for individual and personal usage. If you cite from these documents, whether for personal or professional purposes, please give appropriate citation with both the name of the author (J.W. Wartick) and a link to the original URL. If you’d like to repost a post, you may do so, provided you show less than half of the original post on your own site and link to the original post for the rest. You must also appropriately cite the post as noted above. This blog is protected by Creative Commons licensing. By viewing any part of this site, you are agreeing to this usage policy.