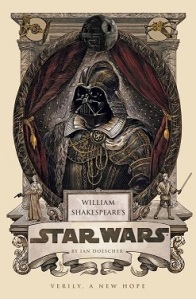 When I first saw William Shakespeare’s ‘Star Wars: Verily A New Hope’ by Ian Doescher, I was immediately intrigued. I’ve been a fan of Shakespeare for some time (I remember reading through Julius Caesar in fourth grade and going on to other plays from there), and of course I’ve also been a huge Star Wars fan for most of my life. What would a combination of the two bring?

The answer is pretty simple: hilarity, fun, and joy. The book is an absolute blast. Here are a few representative quotes:

The scene is on the Death Star when Luke and Han are debating whether to save Leia:

Luke: Hast thou no heart? She sentenc’d is to die!
Han: My sentence is: ’tis better she than I.

[Later, the scene shortly after breaking into the prisoner blocks and Han is trying to answer a call from the authorities about whether they should send a unit:]

Han: —-‘Tis no matter, Sir—-
A slight malfunction o the weapons here.
But all is well, and we are well, and all
Within are well. The pris’ners, too, are well,
‘Tis well, ’tis well. And thou? Art also well?

It’s not just Han who gets great lines. R2D2 is portrayed as a droid masquerading as a simpleton to show that even the simple can make the Empire fall. C-3PO admits his reliance upon R2 in asides, while simultaneously ridiculing the little droid. Vader’s musings over his own place in the Galaxy are thoughtful and provide a better set up for the later stories in the series.

The language remains Shakespearean, though I would note that it is hard to say anyone could equal the master playwright. Rather, Doescher doesn’t try to hard. He simply uses the same language, but clearly imports his own prose into the work which gives the book a feel of a Shakespearean drama without feeling contrived. Throughout the whole book, there remains a feel of genuine drama without ever being overdone. Moreover, the feel of Star Wars is also preserved perfectly. It blends wonderfully with the feel of Shakespeare in a concoction that makes one wonder why it hasn’t been done before.

In short, the book is delightful. I would recommend it highly.