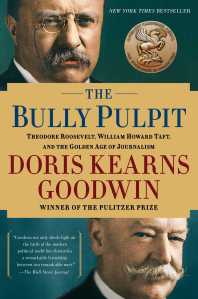 My quest to read (at least) one biography per President continues with William Howard Taft, the twenty-seventh President of the United States. The biography I chose with my selection process (reading reviews online and utilizing and this website- My Journey Through the Best Presidential Biographies) was actually twofold. Initially, I read The William Howard Taft Presidency by Lewis L. Gould. It was tough going, and I felt like I didn’t understand a lot of what was discussed in the historical context in which it was placed. Much hype (in some circles) was on about The Bully Pulpit by Doris Kearns Goodwin, which is a kind of dual biography intermingling Taft and Roosevelt, much as they were in their own lives. That massive volume was much more readable and, more importantly, gave me the context I needed to feel more comfortable understanding Taft’s Presidency.

Here, I’ll offer my thoughts on that biography, and proceed to present my official ranking for the DEFINITIVE RANKING OF PRESIDENTS OF THE UNITED STATES!!!!!! The full list of the rankings with all the Presidents as well as comments on their careers, updated as I read through this list, may be found here.

Taft grew up in a comfortable home that pushed him to work hard to better himself. He graduated 2nd in his class from Yale and went to Cincinnati Law School where he got an education that pushed him to increasing heights. He became a lawyer and a judge, eventually rising to be appointed as a Federal Judge. In that post, in the Sixth Circuit Court of Appeals, he surprised many with several decisions striking down monopoly-like practices in what would become a strong record of antitrust work throughout his life.

An amiable man who was fiercely dedicated to his wife, these aspects served him well as President McKinley opted to send him to the Philippines. Taft tried to work closely with the Filipinos to try to push towards American governance and eventual independence. In this role, he performed very well and was generally liked by both the Filipino elites and the general populace.

Roosevelt was impressed by Taft, having met a few times before, and appointed him Secretary of War. This role, however, was much less about war than it was a kind of advisory role for Roosevelt as well as a way to use Taft on the campaign trail. Roosevelt routinely dispatched Taft to essentially be his mouthpiece during various foreign affair problems of his Presidency. As Secretary of War, Taft was sent to Cuba to reassure Cubans that the U.S. was not intending occupation, to Panama to help consolidate Roosevelt’s imperialistic move to acquire rights to a Canal, to Japan, and back to the Philippines.

Taft had his eyes on the Supreme Court most of his life, but first ended up in the White House, largely against his wishes. His popularity–and Roosevelt’s–all but assured his nomination as an ideological successor to Roosevelt. In office, one of the largest fights Taft had was over tariffs. Desiring to end some of the protectionist policies that he felt were hampering trade with the United States (among other things), Taft endeavored to bring about tariff reform, a project that would seemingly occupy much of his energy throughout his Presidency. He did ultimately manage to get congress to pass some reforms, but the way these reforms passed all but assured some protectionism would continue and took the teeth out of Taft’s ultimate goals.

Taft also began to grow apart from Roosevelt, seemingly due to the ego of each of them preventing them from being the first to reach out to the other. Roosevelt felt he was owed by Taft, while Taft felt that his new position as President meant he didn’t have to defer to Roosevelt in all things. The erosion of this relationship was possibly spurred by Roosevelt’s increasingly progressive stances and surely due to Taft’s botching of Roosevelt’s conservationist goals, particularly in regards to mining of public lands. This rift would, unfortunately, push the two apart after they’d worked so closely together for nearly a decade before.

Another blunder of Taft’s administration was his capitulation to racist interests in refusing to appoint African Americans to various posts. It gained Taft support of many southerners who were initially skeptical of him, but also set back civil rights quite a bit and effectively meant during his administration that if complaints were loud enough about a black appointee, Taft would remove that person from office. This awful situation is surely a blight upon Taft’s legacy.

After a contentious campaign for re-election which effectively split the Republican vote between Roosevelt (Progressive ticket) and Taft (Republican ticket), Woodrow Wilson was elected president. Taft initially went back to Yale before being appointed to the Supreme Court, fulfilling his life-long ambition. In the Supreme Court, Taft wrote opinions which allowed private schools, though made them regulated (a kind of mixed win/loss for the Catholic school presenting the suit); supported businesses against taxation that was aimed at preventing child labor (another strange decision); wrote a rare dissent in support of minimum wage for women; and was involved in many more decisions that would shape policy for some time to come.

Taft’s Presidency and legacy is a mixed bag, filled with some successes and some failures. His decisions shaped the direction of the country in several ways, but these were also of varying import and moral and legal quality. Taft was not the most fascinating President ever, but was a dedicated family man who, it seems, largely stuck to the principles he started off with, for better or worse.

William Howard Taft (27th President – Original Ranking #14)- Taft’s long-term impact is not difficult to judge, but it is difficult to qualify it within terms of his Presidency. Much of his impact comes from his acts as a judge, including as Chief Justice of the Supreme Court. His history of antitrust regulation helped usher in regulations of industries that continue to be challenged and sometimes held to this day. Later in life, as Chief Justice, many of the decisions his court would make deviated from industry regulation, though he remained seemingly antitrust his whole life. Taft was arguable one of the more amiable Presidents in U.S. history, assuming much about one’s status alongside his. On a personal note, his devotion to his wife and family is touching and a good example among many poor examples in the Presidency. As President, Taft would help reform foreign policy in ways that favored skill over nepotism, while also effectively maintaining and somewhat expanding the more imperial aspects of Roosevelt’s Presidency. Domestically, Taft’s refusal to appoint African Americans to posts undercut any kind of progression on civil rights issues and set back the progress Roosevelt made in that sphere. He also pushed to reform Tariffs and try to end some aspects of protectionism, which he met with mixed success. Overall, Taft was a President with both good and bad in policy, and his successes were about even with his failures.