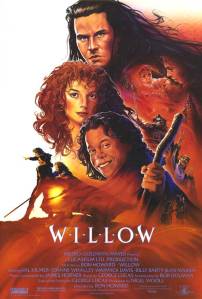 They don’t make movie posters as epic as they used to. This is SWEET!

I embarked on a quest to watch through Tor’s list of 80s Fantasy. I haven’t seen many of those flicks, so I figured I’d watch through. Here, I review “Willow,” another one that I had never seen before. There will be SPOILERS in what follows.

“Willow” is the story of a prophecy- one that says that a dark Queen–Bavmorda–will be overthrown by a child. Naturally, the Queen decides to check for all the children to see if they might be the prophesied one, but also naturally, that one is born and many people manage to work together to smuggle her away. Then, she ends up with Willow, part of a Nelwyn–race of little people–community. After they decide to take the child elsewhere because she’s not their problem, Willow gets embroiled in an adventure to protect the child alongside Madmartigan, a great swordsman (and seeming ne’er-do-well). Along with some Brownies and other characters met along the way, they protect the babe and Willow–the aspiring Sorcerer–saves the day.

Wait, what? I thought the kid was supposed to defeat the Queen! Well never mind that. And really, never mind basically any attempt to be serious about anything in this movie. After an opening that seemingly promised epic adventure, we are delivered a kind of silly, whimsical journey of Willow’s own discovery of himself as a hero.

But you know what? You don’t care. The movie is just that fun. So many scenes stand out as just being uproariously ridiculous, like when Madmartigan and Willow go swooping through the snow, with Madmartigan ultimately getting turned into a solid block of snow. It’s silly, it involves sword fighting, and it’s amazing. Time and again the film delivers huge action scenes that are infused with all kinds of silliness, and as a viewer I really didn’t mind. It just works. Part of what makes it work is that a great decision was made to leave virtually no time for the viewer to sit back and reflect on the plot. It’s just action followed by more action followed by hilarity, all in a continuous cycle. Another part that makes it work is that it is so genuinely humorous. Only rarely do the attempts at humor fall flat.

What does’t work so well is finding the audience. It’s clearly aimed at kids–Lucas himself apparently said so–but there is some pretty creepy stuff like the dark magic or some weird transforming trolls that are super gross. Also, there were clearly some scenes in which you as a viewer are supposed to be taking the movie more seriously… but you just can’t because of the context of the whole movie. It at times wants to be an epic fantasy, but it has sold itself so much on the comedy side that it can’t rebrand itself enough to be taken as seriously as it would like.

What does work, though, is the underlying theme of the “little person” against the overall evil and injustice in the world. No that wasn’t supposed to be a pun! But it works! Anyway, it’s a good story of Willow finding in himself more than he thought was possible, and a story of how one person can change the world.

“Willow” is one part epic adventure, one part a journey of self-discovery, and two parts silly. Whether that is a good thing or not is up to you.

Grade: B+ “Oscillating constantly between ridiculous and taking itself too seriously, ‘Willow’ is a treat.”

Guest Score and comment: My wife gives the movie a B+ “‘Willow’ was a delightful if somewhat absurd fantasy story.”

Silly and fun, “Willow” is an enjoyable adventure.