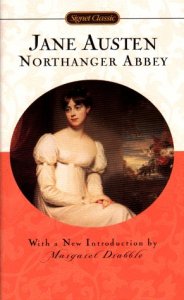 I have decided to mix in some classics with my constant reading of sci-fi/fantasy, philosophy, theology, and biographies. In order to pick which classics to read, I have largely crowdsourced recommendations of which classic literature they have enjoyed, combining this with lists of major classic works. So yeah, pretty subjective, but we can deal. As I read through the classics, there will be SPOILERS, because I want to actually talk about them. Maybe it will encourage you to read them, or, if you have read them already, you can join in a deeper discussion of these great works. Feel free to recommend your favorites, as well.

Yes, I know the last classic I read and reviewed was Pride and Prejudice (click for review), but I’m double dipping on Austen for two reasons: 1) Jane Austen is one of the most talented authors ever, so deal with it; 2) my wife and I went and saw a production of the novel that was just so excellent and fun I knew I had to read it.

I actually ended up nabbing the audiobook of this one and listened to it while working on our new patio. I have to say, this one could actually challenge Pride and Prejudice as my favorite Austen novel. It is so good. More than any of her other novels that I’ve read, Abbey has the satirical voice of Austen coming through loud and clear. Whether it’s that fantastic aside about having characters in novels reading, well, novels (because, after all, why shouldn’t a novelist endorse her own trade?) or the overwhelming feelings and emotions that overtake characters all throughout, this is an absolutely hilarious delight of a novel of manners.

Northanger Abbey is the story of Catherine Morland, a gothic novel obsessed young woman who is of prime marriageable age and her interactions with society around herself. She makes and loses friends, talks to others about her love of specific novels–the more horrible and ghastly, the better!–and finds all the excitement she could have hoped for as the novel goes on. It’s a dramatic melodrama that Austen has layered over the whole work, somehow meshing it neatly into her own formula of social commentary and with so much humor I was laughing out loud as I was lifting cartloads of bricks listening to it. I know of few books that have been this much of a delight.

Austen’s satire is never bitter or even biting. It’s just funny. Yes, it is strange to be obsessed with gothic novels. Yes, the more horrible the better is an odd attitude. And yes, society people of the time would virtually never actually run into such events occurring. But for all of that, and for Austen’s mocking it, she made a masterpiece of her own that I am just as obsessed over as her characters were for gothic novels.

Throw all that in alongside classic Jane Austen twists and turns surrounding society love interests, and it’s a formula for total success. I cannot recommend Northanger Abbey highly enough to you, dear readers! Go read it, or come talk about it, or both!

Reading the Classics– Check out the other classics I’ve been reading and reviewing and let me know what you think of them! (Scroll down for more!)

2 thoughts on “Reading the Classics: “Northanger Abbey” by Jane Austen”